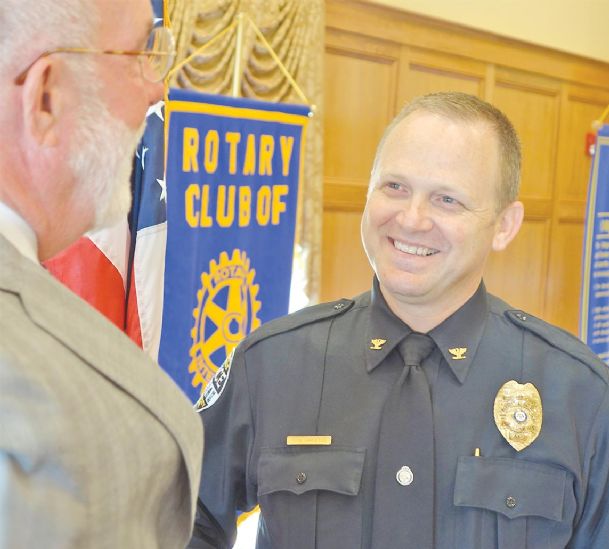 In the past year, Columbus Police Chief Tony Carleton has focused on community policing and building a strong department with top-notch officers.

Carleton spoke to the Columbus Rotary Club at Lion Hills on Tuesday. Carleton, who has been at the Columbus Police Department for just over a year, said up-to-date training for his 59 officers and maintaining a positive relationship with the community is key to building a better department.

"When I got here, it seemed like a lot of things were broken," he said. "I thought, 'Wow, this is going to be a struggle.' But come to find out, there are a lot of good guys who work down there. They just need a little guidance."

During his tenure, Carleton has hired nine new officers. At full force, Carleton hopes to have a department with 82 officers. The chief said he has a five-year plan for the department, which includes creating special operations groups as well as equipping every officer with a rifle. The proper equipment and training is important for the officer's physical safety, but Carleton said he focuses on officer's mental state as well.

He told Rotarians keeping his officers healthy mentally is just as important as keeping them healthy physically. In Mississippi, Carleton said the current divorce rate for law enforcement officers is 168 percent. The chief attributed that number to the amount of stress officer's deal with on a daily basis.

"A lot of the things they deal with are negative," he said. "We spend 90 percent of our time dealing with 10 percent of the population and most of it's negative. It's very rare that we get to save some children ... we don't get to do a lot of that. So we have to find different ways of curving the officer's future, what he's looking for."

Carleton said in order to release that stress, officers need to focus on the positive aspects of their life.

"When you get home, we want you to interact with your family," he said. "We want you to understand that there's a positive influence right here in your life and you need to partake it. Now, the officer will get home and go, 'Give me about 30 minutes to an hour to sit in my easy chair and I just don't want anybody talking to me or doing anything.' Well, you're just moving yourself out of society, out of your family, you're breaking that point."

"I can help them to make some decisions and be a part of the team and they certainly start to want to be a part of it and want to serve," he said.