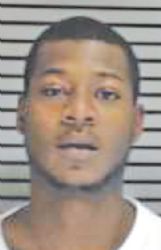 An incident at a Columbus nightclub this weekend ended with a man being arrested for assaulting three police officers.

Officers with the Columbus Police Department responded to Club Heidi Ho, located at 106 22nd Street South, Saturday night for a disturbance, according to a press release issued by the department. When officers arrived at the club, they were told 24-year-old Travon Roby, who allegedly caused the disturbance, was inside. When officers approached Roby and asked him to exit the club, CPD officials claim he became violent, kicking, striking and punching three officers.

He was placed under arrest and charged with three counts of simple assault on a police officer, disorderly conduct, resisting arrest, possession of a controlled substance and 12 outstanding warrants.

Roby is in the custody of the Lowndes County Adult Detention Center.