A piece of installation art lands in Columbus 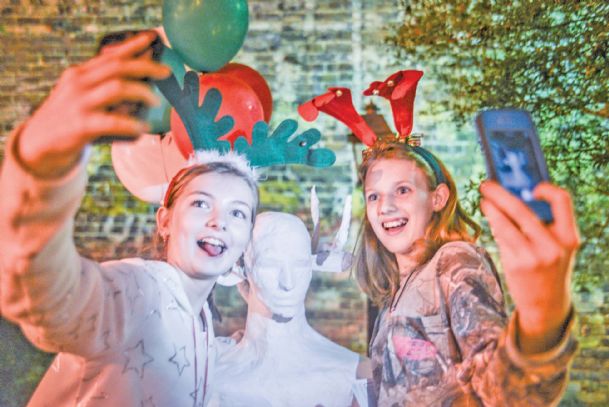 Lily Dunn, 12, left, and Abbie Barton, 13, take âselfiesâ with a piece of installation art at Leadership Plaza during Wassail Fest Friday. Lily is the daughter of Jenny LeBlanc, of New Hope, and Aaron Dunn, of Tupelo, and Abbie is the daughter of Sarah Reedwood and Charles Barton, of Columbus. Photo by: Luisa Porter/Dispatch Staff

Dustin Vance, 22, a senior at Mississippi University for Women stands beside âMr. Tumnusâ in Leadership Plaza in Columbus on Wednesday.
Photo by: Luisa Porter/Dispatch Staff

A new character has made his way to downtown Columbus.

Sitting on a bench in Leadership Plaza, "Mr. Tumnus" beckons people to take a photograph with him and post it on social media. Made of newspaper, wire and plaster of paris, with elfish ears and horns, "Mr. Tumnus" is a piece of installation art created by a local artist.

Dustin Vance, 22, is an art and culinary student at Mississippi University for Women. A senior who plans to graduate in May, Vance decided to put up the piece as a way to test the waters of installation art in Columbus.

"I feel like Columbus is a very artistic town," he said, "but at the same time, they don't get involved with art as much as they could."

Vance created the piece last year as a class project. "Mr. Tumnus" then hung out in a MUW classroom.

When Vance's teacher told him the piece needed to find a new home, he saw that as a perfect opportunity. Vance recently spent several months in Portland, Oregon, where streets were filled with installation art, he said. When he came back to Columbus, he saw a void. With "Mr. Tumnus" -- named for a character from the "Chronicles of Narnia" book series -- Vance hopes to begin to fill that void.

While the current piece is a fun project, Vance hopes to create more art pieces that are socially aware. By asking people to take pictures with the piece and post it on social media, Vance said he is gauging the reaction of locals.

"We decided to go with social media as an outlet to see how they would respond," he said. "It was, 'Hey, will people actually do something if you tell them to and, if so, what can we actually do to make a difference with something important other than just a fun piece of art at Christmas?'"

He continued by saying, "Art has the ability to connect with people that a lot of other mediums don't and I feel like as an artist, we should always be working to try to make the world a better place. If I can do that through my own artwork, then that's what I should be doing. Art is great for personal use but I think it makes a bigger statement and more people can enjoy it if everyone can relate to it."

Vance doesn't know how long the statue will stay in its current spot but hopes "Mr. Tumnus" will be the first of many to come.

"I think Columbus could be one of those really cool towns that has stuff like this," he said. "We're so unique in that we have a historically women's university, an Air Force base and a really diverse town that is full of so many different people that I think you could really have an effective way of doing stuff like this and so many people that would appreciate it."