Last House on The Block gives hope for alcoholics, addicts 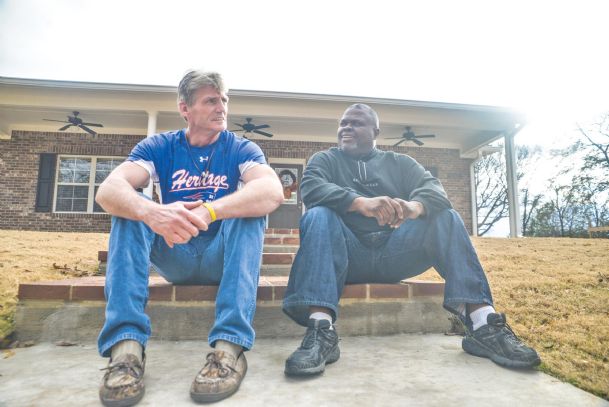 For the men at Last House on the Block in Columbus, who they were no longer defines who they are or where their lives is headed. Now, they have a new label: Saved.

With love and guidance, as well as required attendance at 12-step meetings and church on Sunday mornings, the 10 board members and house manager Billy Jordon show the residents the men God created them to be.

"I see men that had no hope have hope," Jordan said. "They start, not only learning how to love, but to love themselves. Once they love God and love themselves then we can start loving one another."

Love is abundant at Last House. For men who have spent years isolated from their families, Last House provides them with a brotherhood that shows them unconditional support.

"I couldn't ask for better," he said. "It's been life changing. I came with kind of a negative attitude and I didn't really have a good outlook on society, especially myself. I was just about defeated and they have nurtured me...and put me back into society."

Stacy said he had his first drink when he was 15 years old. Over time, he gradually developed a dependence on alcohol, he said. Married three times and with three children by each of the three women, Stacy has spent his adult life in and out of jails, prison and institutions. Because of his disease, he lost contact with his children. At one point, he lived under a bridge. Last year, he bought a 12 pack of beer. He got into his car and, as he was driving, reached into the back seat to grab one. That's when his car left the roadway and hit a concrete embankment. He was on life support for two months. Healing from his wounds, Stacy said he realized, "Man, I've had it. Somethings got to change."

Stacy entered into a treatment facility in Meridian. Once he completed the program, he came to Last House on the Block.

In less than a year's time, Stacy has gone from a man who didn't want to live to someone who regularly attends church, is employed and has been sober for almost a year. His outlook on life has changed. For the first time in 55 years, Stacy has hope. His dreams for the future may sound simple to some. But to Stacy, living what he calls a "normal life" without alcohol is his deepest desire.

"I didn't have a say-so over my life or anything. Alcohol was running it," he said.

Sober now for two years, Rogers said he had been drinking for as long as he could remember. His father used to joke about him stealing sips of beer when Rogers was in diapers. Born in North Carolina and raised in Hawaii, Rogers sold drugs when he needed money. Now, he proudly talks about paying taxes. That, he said, is the result of God's love.

"It gave me a relationship with God that I've never had before," he said.

Daily devotions and Bible study's are part of life at Last House on the Block. Rogers said it is a sight to behold.

"You can truly say God is in this place," he said. "There's no other place that a bunch of guys that are convicted felons, have been in trouble, you name it, we've done it pretty much, and we all sit around the table and talk about our devotion and talk about God for hours...this is a group of guys that you never would have thought would get together. That's God right there."

Building a relationship with God is at the forefront of what Last House is all about, Jordan said. The men learn to depend on God and His strength and not their own, he said.

"They start studying the Bible and building a relationship with God, going to 12-step and recovery, you start seeing a dramatic change," Jordan said. "Where when they came in they were frowning, now they start smiling. Where they were once unemployed now they become employable so things start picking up for them really good. The relationship with their family starts forming again."