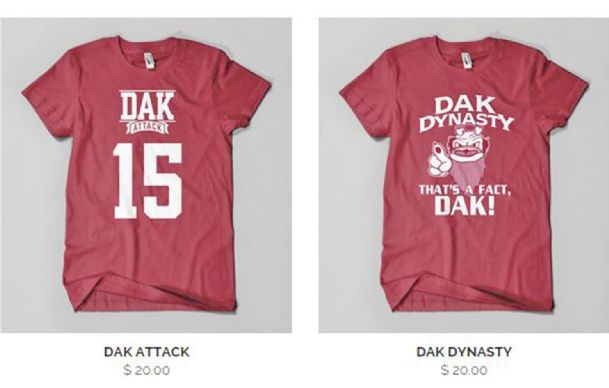 Court records show Prescott, who is represented by the Jackson-based firm Baker, Donelson, Bearman, Caldwell and Berkowitz, seeks an injunction and damages against the Gulfport-based Matthew Print and Apparel Company LLC after it printed and sold clothing with references to his name, including "Dak Attack" and "Dak Dynasty."

Prescott did not authorize the company to use his name, records show.

The company and its apparent owner, Christian Matthew, have ignored two cease and desist letters sent on Prescott's behalf in October, court records claim. A third letter stated counsel would file a legal complaint if no response was received by Nov. 26, the filing states.

As of Nov. 19, the company continued to sell the T-shirts on its website, which was registered by Matthew, the filing states.

As of Thursday, a Facebook post dated Dec. 5 on the company's page was present and said it would extend sales on merchandise, including the Prescott-related apparel.

The company's website -- matthewprintcompany.com -- listed the two Prescott-related shirts as for sale for $20 each Thursday, but the listings were later removed.

It also cites NCAA bylaws that require student-athletes to take action against commercial products and their vendors who sell items bearing their name or picture, or use their likeness to promote products "in order to retain his or her eligibility for inter-collegiate athletics."

Prescott's attorney argues the quarterback -- who led the MSU football team to 10 wins and an upcoming Orange Bowl appearance this season -- has the right to control his name, its associated phrases and likeness for use in commerce and that the T-shirt company misappropriated his name. The company's continued usage of the phrases could create a "false impression that they are affiliated with or endorsed or sponsored by the trademark owner."

The filing seeks compensatory damages, "which includes commercial damages for the goods" sold, and punitive damages since the company continued to sell shirts after presented with cease and desist letters.

It also asks to recover attorney's fees, "as the defendants engaged in willful and intentional misconduct."

The Dispatch first reported in October that MSU's Office of Athletic Compliance and Office of General Counsel were both working to identify businesses in clear violation of NCAA legislation, university trademarks and infringement upon players' likenesses.

Although the university sent a letter to the local chamber of commerce stating several area businesses used pictures of student-athletes for promotional purposes, Bracky Brett, senior associate athletic director for compliance, said MSU identified about a dozen vendors attempting to sell infringing apparel and goods statewide at the time.

Brett said his office would pursue the image-use issue, while general counsel and Licensing Resource Group, a subsidiary of Learfield Communications that handles MSU's licensing, both were dealing with reports of trademark infringement.

That same month, Brett also confirmed to The Dispatch that Prescott had an attorney working to protect his name in an attempt to possibly control it after his collegiate playing career comes to an end.