Prof. studies why Delta deer are biggest in state 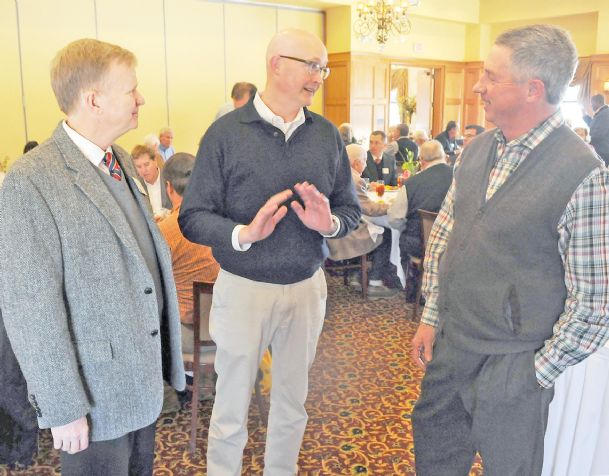 There are roughly 1.75 million deer in Mississippi and they bring an estimated $1 billion economic impact to the state.

That's why Bronson Strickland, an associate extension professor at Mississippi State University, believes it is important to know which factors lead deer in some parts of the state to be bigger in size to those from other parts. Strickland spoke to the Columbus Rotary Club at Lion Hills on Tuesday about how a mixture of genetics and environment affects deer throughout the state.

Strickland has been involved in a MSU experiment that studies development of deer from different parts of the state with the intention of discovering if physical characteristics -- particularly body size and antler size -- are due to genetics or environmental impact.

Strickland has found that for Mississippi deer, it is a mixture of both. He called this epigenetics, changes in gene expression which are inherited but which do not change an animal's underlying DNA sequence.

Delta deer are bigger than those in other regions because Delta soil has more nutrients and the deer have more to eat. The average deer in the Delta is 44 pounds heavier and has antlers around 25 inches longer than a deer the same age and sex from the Lower Coast Plane, Strickland said.

For the experiment, scientists at MSU captured pregnant does from around Mississippi and took them to Starkville, where the deer were given an equal amount of food and nutrition. Fawns that were born were also given the same amount of food. All the deer had the same environment.

The fawns with mothers born in the wild had the same regional differences as wild deer, Strickland said. The deer with mothers from the Delta were on average 48 pounds heavier than deer from the coast. The following generation of deer also had differences in body and antler size, but this time the Delta deer were only about 30 pounds heavier. It was not until the third generation of deer born in captivity that the food from their environment had the same effect on all of them. That generation of coastal deer had much bigger body sizes than the first generation of coastal deer born in captivity.

Strickland explained that the last generation of deer had the same genes as their ancestors, but that some of those genes could be turned on or off by the environment.

"Those genes for growth ... get turned on or get turned off based on the mother's condition," said Strickland. "So if mother's in good condition or bad condition, she passes on her genome, but also with it is a little tag...that goes along with it that says, 'Don't turn this gene on. It could be damaging. There's not going to be enough food for you to grow that big.'"

The experiment is important, Strickland said, because of the $1 billion per year economic impact of deer in the state. Because of that impact, it is important to know which factors to control in order to create bigger deer.

"A lot of people think we're going to go out and start a supplemental feeding program ... and those deer are going to turn around," Strickland said. "Not really. They're going to have a response, but it's nothing like the type of response that you're going to see from generational changes in nutrition."