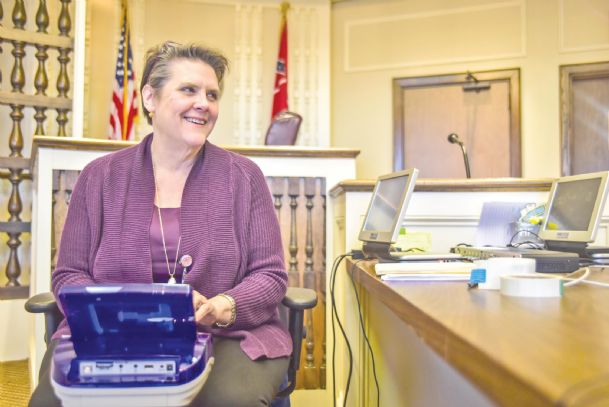 Melanie Morel, a court reporter for Clay County Circuit Court, poses in the Lowndes County Courthouse last week. Morel and other court reporters play an important part in making sure the justice system works, as they record â word for word â how trials play out. Photo by: Luisa Porter/Dispatch Staff

Cindy Zelinka and Melanie Morel both hold vital jobs in the justice system.

They are court reporters for the circuit courts of Lowndes, Clay, Oktibbeha and Noxubee counties -- they record every single word uttered during courtroom proceedings.

"I feel my job is important because we write down everything that is said in the courtroom and memorialize it for future review," Zelinka said in an interview conducted via email with The Dispatch. "Having a real person there helps control the record. We can stop a speaker if they're too fast, ask them to repeat something."

The job is an important part of ensuring the justice system works, according to District Attorney Forrest Allgood.

When a case is appealed, the appeals court looks at the court records to ensure no error occurred in the trial.

"The court reporter is the one that makes that record," Allgood said. "If they make errors...it can be a real tragedy that ensues, so they are very important to the system."

The job does not just entail typing quickly on a steno machine, the typewriters used by court reporters in trial. To become a certified court reporter in Mississippi, applicants must pass the Mississippi Board Examination, according to CourtReporterEDU.org. The exam includes a skills test in which applicants must demonstrate that they can type 225 words-per-minute while transcribing a two-voice testimony. That means court reporters have to be able to type more than three words per second.

The fast writing pace is what attracted Morel to the job.

"When I was a senior in high school, I took a...shorthand class, because I thought it would be an asset for college note-taking," Morel said in an email. "Turned out I really loved writing shorthand, and love the challenge of writing faster and faster."

When not in trial, Zelinka and Morel write guilty pleas and motions, or transcribe records to send to other courts or at the requests of lawyers and other involved in the trials.

The most difficult thing about the job for Zelinka is making sure everyone in the courtroom speaks so that she can understand and write what they say.

"We're accustom(ed) to some noises that will occur in a courtroom," she said. "But sometimes it's the little things that will throw off my concentration...rattling change in a pocket, clicking a pen constantly, and coughing."

This is something lawyers have to be aware of, according to Allgood.

"There's things that lawyers do that will drive them crazy, like clicking a pen," he said.

Morel said the hardest thing about her job is reminding people in the courtroom that she has to be able to take notes.

"Judges, lawyers, and litigants sometimes talk over each other, which is impossible to report," she said. "We have to remind everyone not to interrupt each other while we're on the record...it's...impossible to hear what was said when that happens. Sometimes proceedings in the courtroom can get heated and emotions are high."

"Writing fast enough is another challenge," she added. "Two hundred and twenty five words a minute sounds fast, but people often speak much, much faster than that."

Plus, there is the challenge of hearing stories about crime day in and day out. Both Morel and Zelinka said they have to learn to focus only on the words they are writing.

"Some cases are tougher than others," said Zelinka. "You do your best to disconnect. Sometimes it works, and sometimes it doesn't. I have swallowed several lumps in my throat throughout the years. I do my best to just concentrate hard on the words and try not to comprehend what's said. It might not affect me there in the courtroom, but it definitely stays with me."