Homeless people need libraries, and libraries need them, too 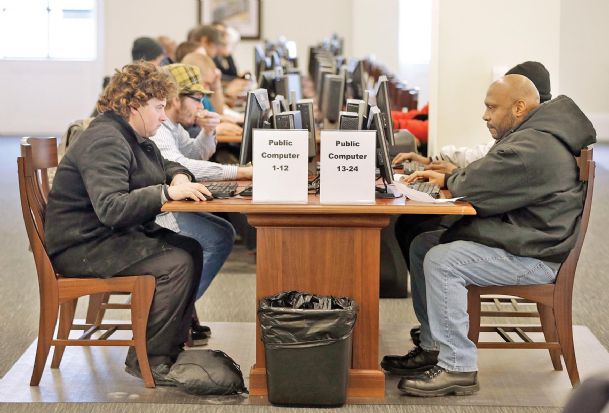 In this Feb. 19 photo, Larry Lawrence, left, who slept on the street the night before, works at a computer at the Nashville Public Library in Nashville, Tenn. Photo by: AP Photo/Mark Humphrey

It's not just that he loves books. For the 43-year-old who sleeps in a tent outside a local church, the library is pretty much the only place he can go that won't charge him to provide safety, warmth, useful services and entertainment.

Many public libraries discourage homeless people from hanging around all day. "It could be the way you dress, the way your hair is," says Bailey, whose scruffy denim jacket could use a good wash.

But just as Bailey needs his library, the library needs him: In this digital age, many people who used to depend on libraries can find what they need online without leaving home. Menaced by budget cuts, many public libraries are effectively failing to justify their relevance, reducing their hours year after year.

At the same time, libraries are more important than ever to people who can't otherwise get connected: Nearly two-thirds provide the only free computer and Internet access in their communities, according to the American Library Association.

In the 25 years since the ALA adopted a policy urging full access for poor and homeless library patrons, few have taken this mission as far as Nashville's main downtown library, where Bailey arrives early each day, standing on an icy sidewalk in below-freezing temperatures with a half-dozen other people until the ornate bronze doors open.

Once inside, he goes directly to the third floor, where rows of computer terminals are quickly occupied by people carrying bags filled with their worldly possessions.

The library recently renovated this section with their homeless patrons in mind, ditching countless shelves of bound copies of "Popular Mechanics" and other periodicals that are now available electronically, and making way for 68 computers and more tables with Ethernet connections and power outlets.

"They have a good book selection, a good music selection, movies," Bailey said one morning after using Facebook to check in with his family. Without being able to stay at the library, "I'd probably do a lot of walking and trying to find a place to use the Internet."

More than 70 percent of librarians surveyed several years ago said they weren't aware of any libraries that successfully serve the poor, according to an ALA report.

"I think there are still a lot of punitive policies and a lot of barriers ... rules about the size of baggage you can bring in or policies about odor or no-sleeping policies," said librarian Julie Ann Winklestein, who co-wrote an ALA pamphlet to help librarians better serve people who have already been turned away by other institutions.

The single most important thing libraries can help people do online is find a job, the ALA found. Even fast food restaurants require online applications now. But many libraries still require patrons to have an address and photo identification to get a library card, and then limit the time patrons can spend online.

Librarian Liz Coleman, who serves on a new Homelessness Advisory Committee at the Nashville Public Library, says her co-workers are frustrated they can't help everyone. One regular patron died of exposure; another was hit by a car and died shortly before he was to receive housing.

"It was a feeling of kind of helplessness," she said. "You see these folks every day, so you can't help but care about them. But what are you going to do? You can't take them home with you."

But librarians don't have to shoulder the burden alone: In a partnership with other agencies, the Nashville library hosts drop-in hours with city social workers and mental health counselors.

They helped Susan Hulme's sister-in-law after she was hospitalized and couldn't work to get food stamps and other resources for finding a new job. The woman was embarrassed, and intimidated by the bureaucracy of the social services agency. Going to her library made it easier.

"It was more friendly, more accessible," Hulme said. "It was a safe place for her to tell her story."

Other exceptions include Pima County, Arizona, where public health nurses wander the county's 27 libraries with stethoscopes around their necks, offering blood pressure checks and identifying difficult cases for more care.

In Weber County, Utah, public housing workers rely on librarians who know their homeless patrons by name to help them locate people approved for housing vouchers.

Librarians with The Queens Library in New York City work with the Department of Education to go into homeless shelters to hold library card drives, read stories to children, give away books and lead discussions with teenagers. The library also connects people to emergency food, shelter and legal services through a mobile phone application.

Pooling resources like this may seem obvious, but these agencies still don't work together in many communities. Winklestein says that needs to change, since providing information to the public is what libraries are supposed to be all about.

"Librarians can't solve people's problems, but we can provide them the resources to solve their own problems," she said.