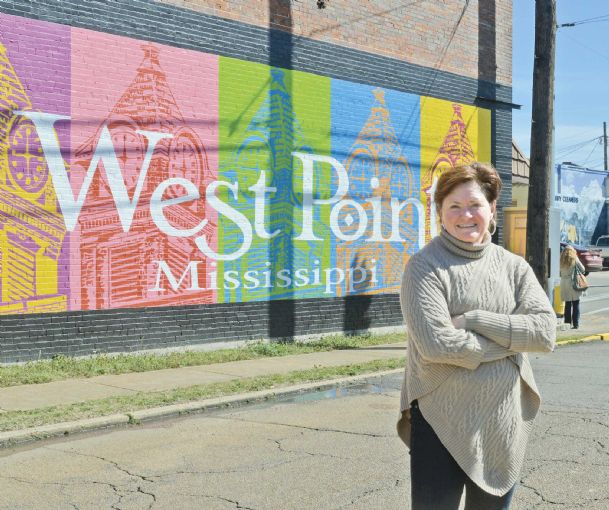 Deborah Mansfield of Deborah Mansfield Decorative Painting poses in front of one of the many murals situated in downtown West Point on Friday. Mansfield has painted four murals throughout the town and is working on a fifth. She produces these city murals at no charge. Photo by: Mark Wilson/Dispatch Staff

Pictured above is a mural on the side of West Point's Cash & Carry Cleaners. Mural designer Deborah Mansfield said she began painting these murals because she thought the town needed 'a fresh coat of paint.'
Photo by: Mark Wilson/Dispatch Staff

The side of Cash & Carry Cleaners is painted with clouds rolling over the scene of a dog leaping to catch clothes flapping on a clothesline; another mural salutes Howlin' Wolf and the South's heritage of blues music; another is an Andy Warhol-style rendering of the West Point clock tower in several different color combinations.

Mansfield, who owns Deborah Mansfield Decorative Painting in West Point and previously operated a faux finishing business in Houston, Texas, has painted for her entire life. She wanted to study art in college, but her father talked her out of it. Instead, she studied landscape architecture.

When she and her husband moved to West Point three and a half years ago, Mansfield already had a lot of artistic experience under her belt.

"I joined the Main Street Design Committee," she said, "because I felt like the town needed a fresh coat of paint."

It was Mansfield's idea to paint murals on the sides of West Point's buildings. Her first idea was the mural on the side of Cash & Carry Cleaners. First she went to the Main Street Design Committee to ask for permission. The committee told her to go to the building's owner, who liked the idea. The owner paid for the paint supplies, and Mansfield went to work.

"I thought that whole corner needed some help," Mansfield said. "I had seen this picture of a painting of a cloudy day with a clothesline, and I thought something like that would be perfect for the side of a dry cleaner wall."

The mural sparked interest for more in the town. The next mural Mansfield produced was the Howlin' Wolf painting, which she designed with Kathy Dyess.

"That was interesting because we used prisoners to help lay the brick," Mansfield said. "We used a youth group that comes in the summer that helped us paint the walls and pull the weeds away from the original sight, so we had a lot of volunteer input."

She is now working on a fifth mural. For each, Mansfield presents her idea and design to the design committee and then to the building's owner. She develops a written agreement with the owner just in case the owner does not like the finished project. Next, she and her assistant, Lila Miller, get to work, paying for the painting equipment with either grant money or money from the building's owner.

The time each project takes adds up. Miller put over 400 volunteer hours into the West Point clock tower painting. She does these city murals at no charge.

Miller is a West Point native who spent several years in Paris, where she was involved in street art groups that worked on public art projects. When she moved back, her sister introduced her to Mansfield, and the two artists began working together.

"It's wonderful to work with Deborah," Miller said. "She has so many ideas and so much energy."

Miller and Mansfield make a good team, Miller said, because while Mansfield is good at coming up with ideas, Miller can foresee obstacles that Mansfield does not.

The clock tower is probably Miller's favorite, but the duo have more ideas which they want to present to the committee. For the most part, the community has been supportive of their projects. Mansfield remembers one incident in which a little boy rode by on his bike and gave her and Miller bottles of water.

"There's nothing better than standing outside on a hot day on the scaffolding and a little kid comes by and gives you a cold bottle of water, says 'Thanks for painting that'," Mansfield said.