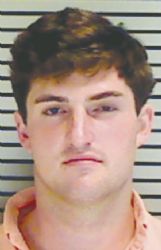 Colton Younger, 22, was arrested about 11:45 a.m. on Old West Point Road by narcotics officers with the Columbus Police Department and the Lowndes County Sheriff's Office. He paid a $2,500 bond and was released Wednesday morning, according to Archie Williams with LCSO narcotics.

Younger is charged with felony possession of a controlled substance and driving with a suspended driver's license, a misdemeanor. If convicted, he faces up to four years behind bars.

CPD Capt. Brent Swan told The Dispatch that on May 6, officers found Younger in possession of two pills. At the time he was a passenger in a vehicle stopped on Military Road.

Williams said the crime lab determined the pills Younger had were OxyContin, possession of which by a non-prescription authorized person is a felony. An arrest warrant was issued. Justice Court judge Chris Hemphill signed it. Although both CPD and LCSO were involved in the case, the Lowndes County Adult Detention Facility listed LCSO as the arresting agency.

Williams said that when officers arrested Younger, they found him in possession of marijuana and that he was driving with a suspended license. An official with the Mississippi Highway Patrol Records Division on Wednesday told The Dispatch the agency does not release information on why a license has been suspended.

"He's just a young man who got in trouble, what else can you say?" Charles Younger told The Dispatch Thursday.

Charles Younger was elected in a special November 2014 election to fill the seat of the late Terry Brown in the Mississippi State Senate. He is currently running to continue serving as District 17 Senator.

Rodney Ray, attorney for the Younger family, told The Dispatch he is in the process of "investigating every aspect of the May 6 arrest and the subsequent arrest."