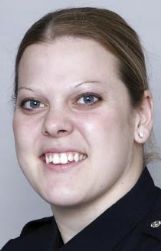 OMAHA, Neb. -- A Nebraska man opened fire Wednesday on officers who were trying to arrest him for a previous shooting, prompting police to return gunfire in a shootout that left one officer and the suspect dead, Omaha Police Chief Todd Schmaderer said.

Schmaderer said Orozco was part of a fugitive task force looking for Wheeler to serve a felony arrest warrant. Wheeler, who was wanted on a warrant charging him in an earlier shooting, opened fire on the officers as they approached him. Officers fired back, and Wheeler was later found behind a neighbor's house suffering from gunshot wounds, the chief said.

A semi-automatic handgun was also found on Wheeler, Schmaderer said.

"Mr. Wheeler is a convicted felon and a known gang member," he said.

Orozco was a seven-year veteran of the department and worked in its gang unit, Schmaderer said. She was also a new mother with a premature baby who is in an Omaha hospital.

"(The baby) is set to be released from the hospital tomorrow," Schmaderer said, his voice breaking.

It's been more than 10 years since an Omaha officer was killed in the line of duty, when Officer Jason "Tye" Pratt was shot and killed in September 2003, while chasing down a fleeing suspect. The suspect, 21-year-old Albert Rucker of Omaha, was in turn shot and killed by another officer.

Orozco is the first female Omaha police officer to die in the line of duty, according to a list on the Officer Down Memorial online page.

Besides her daughter, Orozco is survived by her husband, Hector Orozco, two stepchildren ages 6 and 7, her mother and two siblings.

Kerrie Orozco coached baseball at an Omaha Boys and Girls Club, was a Special Olympics volunteer and served as president of the Police Officers' Ball to benefit the Special Olympics, the chief said. She also took in rescue dogs and was a Girl Scout mentor.

"She was a friend, a popular officer," Schmaderer said. "I just can't even imagine that this has happened. The city of Omaha owes her and her family a debt of gratitude."

Dr. Michael Wagner, a trauma critical care surgeon at the hospital, said his team provided "aggressive care" to both Orozco and Wheeler, but neither could be revived. Paramedics had performed CPR on both the officer and the suspect as they were taken to the hospital.

Tiffany Atkins, who lives less than a block from where the shooting happened, said she heard between five and 10 shots Wednesday afternoon in the Florence neighborhood in north Omaha, made up mostly of tudor-style brick homes along tree-lined streets. She said she took shelter in her basement and heard police cars swarming the scene within seconds of the shooting.

"I was raised in this neighborhood," Atkins said. "This makes me want to move."