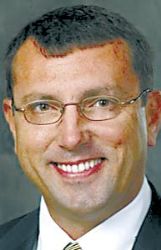 Golden Triangle Development LINK chief operating officer Joey Deason predicted bond intent notices that could help fund a future industrial park will come before city and county leaders as early as July now that both boards have formally recommitted to the organization's search for land.

Starkville aldermen approved resolutions reauthorizing the LINK to move forward with a new site selection process after abandoning the 326-acre Innovation District in west Starkville due to possible cultural artifacts on the property and the growing costs associated with vetting and clearing the area.

The board voted 5-1 -- Ward 7 Alderman Henry Vaughn was absent, while Vice Mayor Roy A. Perkins was the lone representative to dissent -- to prepare the city for another round of bond intent notices.

Both the city and the county previously readied individual $5 million bond packages to fund due diligence and infrastructure improvements for the planned Innovation District.

Efforts to land significant manufacturers in the lone county-owned industrial park -- Cornerstone Park, located south of Starkville on Highway 25 -- have failed to generate much interest since the area's electrical capacity is inadequate.

Deason iterated Tuesday Starkville "does not have a product" which the LINK can aggressively market for large-scale projects.

In April, LINK chief executive officer Joe Max Higgins said his organization was likely to search for a 250-350-acre site in northern or eastern Oktibbeha County, one that can easily be serviced by connecting infrastructure -- electricity, water, sewer and transportation.

The future site could also fall outside of Starkville's incorporated territory, he said.

"We've got a few we've elected to go further with exploring, but it's like the song 'Once Bitten, Twice Shy' -- before we get them very far, we're going to get those sites in front of our archaeologists," Higgins said last month.

The LINK could also utilize a different development strategy: identifying single sites for investments looking to immediately locate to Oktibbeha County. Success with stand-alone sites could follow because of the smaller demands on neighboring electrical, water and sewer systems.

"If you think Starkville will work for you, we're going to find a site that will work. We can nickel and dime the infrastructure rather quickly to get someone in if needed," Higgins said last month. "We don't always have to wait for a park to sell (Oktibbeha County)."