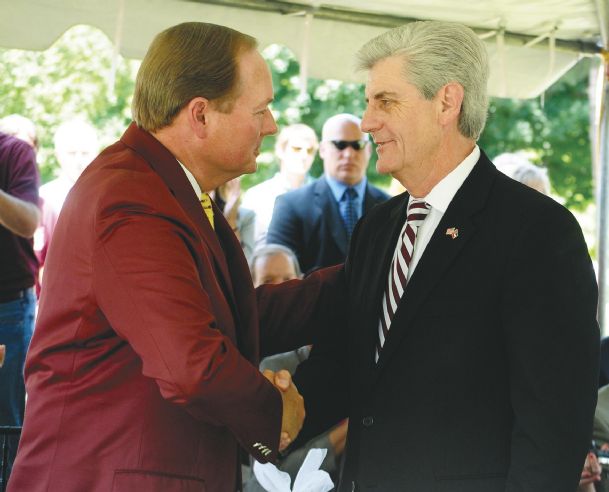 STARKVILLE -- Mississippi State University wanted to make a victory lap with Mississippi flare. And it was one that couldn't be contained on the ground.

Researchers sent a small unmanned aerial vehicle -- the three-pound Precision Hawk Lancaster 3 -- soaring above the North Farm at the Thad Cochran Research, Technology and Economic Development Park on Friday before a crowd of more than 100 spectators. The demonstration helped celebrate the Federal Aviation Administration's selecting MSU's Raspet Research Lab as the site for its Center of Excellence for UAS Research.

As part of that initiative, MSU will lead a team of 21 universities, including 15 core members and six affiliates, in a research alliance that hopes to further develop unmanned aircraft systems' capabilities and their role in the future. Congress has provided $5 million toward the effort, deemed the Alliance for System Safety of UAS through Research Excellence (ASSURE), and the alliance must put up a $5-million match this year.

"We won," Shaw said to start the celebration ceremony, which also featured MSU President Mark Keenum, Gov. Phil Bryant and newly-appointed Mississippi Development Authority director Glenn McCullough. "It's another great day to be a Mississippian and a Bulldog. We're here to celebrate both of those facts with the great win that this university and this state have experienced."

Shaw said UAV, or "drone," research is "boundless" with practical applications for the emerging technology already developing for agriculture, engineering and disaster relief.

"What can be done with these is only restricted by your imagination," he said.

Beyond developing drone technology and applications, Shaw said the center would also help define drones' place in the national airspace and work toward helping lawmakers develop policies that allow UAVs and conventional manned aircraft to coexist safely in that airspace.

Shaw said the alliance's 21 universities control a total of more than 500 UAVs, ranging from three pounds to nearly the size of a Cessna airplane. MSU, he said, has about a dozen UAVs with the largest weighing 15 pounds.

"We don't want to own a lot of drones," Shaw told The Dispatch. "We'd rather use drones that belong to private companies and help them develop new applications and new technology."

McCullough said hundreds of Mississippi companies -- including Aurora and Stark Aerospace -- are developing aerial technology and could immediately benefit from the MSU-led research. That, in turn, will create jobs in multiple fields.

"All UAS companies depend on cutting-edge technology, and that chain of technology will pass through Mississippi," McCullough said. "You're talking about careers in engineering, business management, math and science. All those disciplines are critical to this."

During Friday's ceremony, Keenum said drone technology is here to stay and he is proud MSU will make a marked impact on the role of UAVs.

"UAVs, UASs or drones, as they are commonly referred to, are going to have a big impact on our lives in the future," Keenum said. "...Our role here with this center of excellence is helping introduce this technology into our society and into our commercial airspace, and to do it in a very safe manner and in a very efficient manner. That's a tall order. That's a big challenge. But I'm convinced ... we're up to the task."

MSU embarked on a six-year process to bring the center of excellence to its campus. Part of that effort involved Gov. Bryant communicating often with U.S. Transportation Secretary Anthony Foxx.

Bryant, on Friday, spoke to those efforts and said he and Foxx grew closer throughout the process.

"I will use whatever is necessary," he added.