CREATE executive: 'We have a massive problem on our hands' 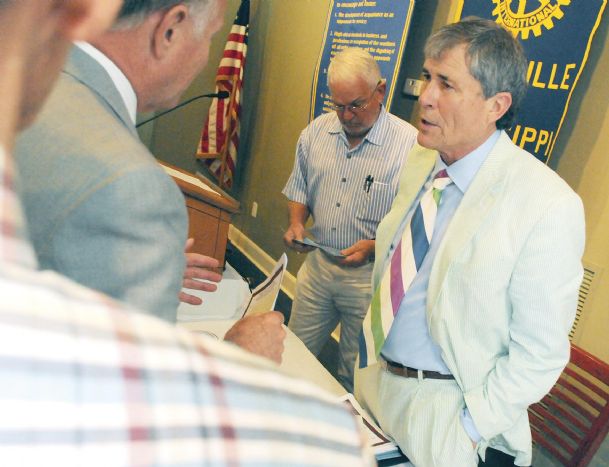 STARKVILLE -- For the past 10 years, Lewis Whitfield has been an executive with CREATE, the Tupelo-based community foundation that has grown to serve 17 counties in northeast Mississippi since it was founded in 1972.

Whitfield spoke Monday to the Starkville Rotary Club about the foundation's goal of improving quality of life, but he relied on his previous experience as a banker in giving his audience a portrait of the region's challenges.

As a banker, Whitfield said, good data is essential to solving any problem. And while he confessed he doesn't have the answer for the problems northeast Mississippi faces, he has a good grasp of the problem.

One of the biggest is per-capita income.

"We have a pretty big hole to climb out of," Whitfield said.

Mississippi lags behind the rest of the nation in per-capita income -- that did not surprise Whitfield when he crunched the numbers. Something else did, though.

"Northeast Mississippi isn't just behind the other states," he said, "we are behind other parts of the state, too."

"According to the research, the per-capita income of people in our region is 66.6 percent of the national average. A modest goal, we felt, was to try to push that up to 75 percent."

The question was a simple one: How?

One way was through education and again, research produced interesting results.

Studying 10 years of drop-out statistics from the Mississippi Department of Education, Whitfield discovered something interesting: Enrollment remained consistent in grades 1 through 9, with a little more than 40,000 students in school over that period. But by the time those students entered 10th grade, the drop-out rate exploded.

There were 6,000 fewer students in 10th grade than in 9th, more than 5,000 students fewer in 11th grade than in 10th. Upon the end of the 12th grade year, just 26,000 students had graduated from a population of 41,000 that has entered school 12 years earlier. In other words, for every 20 students who entered first grade in Mississippi 10 years ago, almost a third will leave school within 12 years without a diploma or GED.

CREATE has attacked that problem on several fronts, providing grants to GED programs, working with Mississippi State University and the University of Mississippi on their teaching programs, which seek to attract the "brightest and best" to the teaching profession and working with its partners throughout the region to provide free community college tuition to every high school graduate in the region.

Education, Whitfield insists, is the key factor in improving the quality of life in the region.

"It sets the bar for everything that follows," he said. "And what we are learning is that for many of our kids, they fall behind early on and when a child falls behind early, it's very difficult for that child to catch up."

The jobless numbers reflect that, too.

"We have a massive problem on our hands," Whitfield said. "It's a pretty big hole."