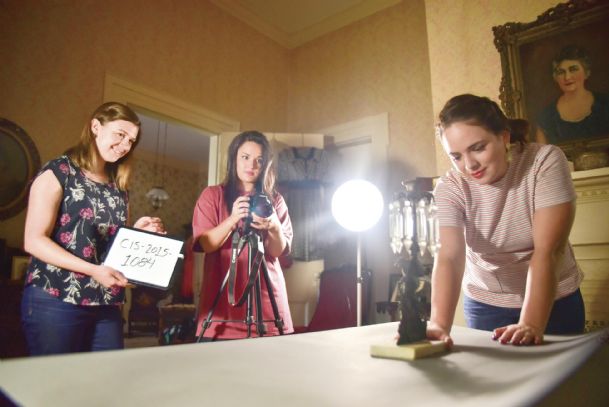 Caryne Eskridge, Lauren Clark Hill and Hannah Boettcher set up an antique item to be photographed at the Amzi Love Home in Columbus. The women, of the Classical Institute of the South, have spent the summer in Southern cities going to antebellum homes cataloging antique objects for an online database. Photo by: Luisa Porter/Dispatch Staff

In the dim lighting of the Amzi Love Home on Seventh Street, a group of women hover around a table in the front bedroom.

One adjusts a 150-year-old candlestick on the table, while another suggests which way to turn it, and yet another waits to take photos of it. Scattered around the room are laptops, photography lights and other technical equipment that stand in sharp contrast with the 19th century-era clothing laid out on the antique bed, and old picture frames and other antebellum objects awaiting their turn to be photographed.

The women are from the Classical Institute of the South, a New Orleans-based non-profit that tracks down private collections of historical objects in Alabama, Mississippi and Louisiana.

While projects like the CIS's have been undertaken in other parts of the country, this is the first to track down privately-owned historical objects in Gulf states.

"It's the first survey like that of its kind," Caryne Eskridge, the project director, said.

Eskridge and two summer fellows from the program -- Lauren Clark Hill and Hannah Boettcher -- have spent the summer in Southern cities going from antebellum home to antebellum home for the project.

They arrived in Columbus two weeks ago and were joined by interior design student Hannah Monroe, who attends Mississippi State University. Monroe was there specifically to help with Columbus research.

The four spent a handful of days in each house. They usually pick objects from the 1860s or earlier. They enter a thorough description of each object into an Excel spreadsheet, making note of dimensions, surface treatments, hardware, inlays, marks and more. They also enter any information they know about who owned the item and record any stories about the item that the current owner tells.

Of course, if there is no story for the object, the women make up stories about them to entertain themselves as they sit cross legged on the floor typing their notes or place objects for photographs. Each of them has a piece of furniture or knick-knack that they get more excited about than others.

Hill, a history student from George Mason University, is fascinated by objects made out of human hair. Boettcher likes objects that have traveled and play a role in stories about the people who owned them.

Boettcher particularly liked Columbus historian Rufus Ward's traveling liquor set. When she was catalogueing items in his home, she found that several pieces from the set were missing from the set. Ward had them in his kitchen. He told Boettcher that he thought it was important to keep using the objects -- otherwise, why keep them?

One of Eskridge's favorite objects in the Amzi Love Home is a waxwork sculpture of flowers. She imagines it was made by one of the five daughters of Amzi Love, or possibly their mother. Waxwork sculptures, she explained, were activities specifically for women in the 19th century.

"I always like to see things that clearly deal with women and what they were doing," she said.

"A lot of them have (retail) marks on them, which is really cool," she said. "A lot of the objects we've documented haven't had that."

To see the objects or to learn more about the project, go to classicalinstituteofthesouth.org.