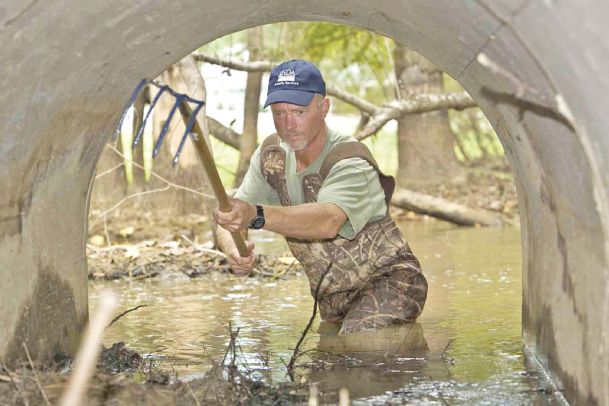 U.S. Department of Agriculture Specialist Frank Massey digs a beaver dam out of a culvert near Jackson in this undated photo. The state of Mississippi spends, collectively, roughly $1.2 million a year on beaver control. Lowndes County supervisors recently allocated $80,000 for this year to deal with the problem. Photo by: Courtesy photo

In his weekly column, Columbus historian Rufus Ward often recounts the experiences of the first white settlers to move into Lowndes County in the early 19th century. In almost every account, it seems, a pioneer is sloshing through one part of the county or another, an indication that the landscape that defines the area today is far different than it was almost 200 years ago.

In the early 1800s, Lowndes County was a pretty soggy place, if history is our guide.

Man's ability to manipulate the county's rivers, creeks and streams played a large role in the changes that have occurred since then.

But Kris Godwin says there was another prominent player in the area's environment.

"Certainly, the (human) channelization of the Tombigbee River changed that," Godwin said. "But, more than likely, the beaver was very influential in how the landscape looked 150, 200 years ago."

What beavers, long known as "the engineers of the forest," created, man has recreated to suit human preferences.

That can be a pretty expensive proposition.

Godwin, who for the past 16 years as been the director of the USDA Wildlife Service's Beaver Control Assistance Program, says the state and counties spend around a combined $1.2 million annually to control the beaver population and the damage beavers cause to roads, bridges, forestry, agriculture and private property.

"In a typical year, we'll remove anywhere from 1,500 to 2,000 beaver dams throughout the state," says Godwin, who is based in Starkville.

In its last board meeting, Lowndes County supervisors approved funding for beaver control up to $80,000 for 2016.

"Lowndes County has John Powell 100 percent of the time," Godwin said of the USDA agent who has been battling beavers in the county for more than 20 years. "Some counties come into the program and go out, based on the need, from one year to the next. We don't make any stipulations about that. In Lowndes County, it's pretty steady every year."

The beaver, America's largest rodent (an adult can weigh up to 60 pounds), has seen dramatic population changes over the past 150 years. Prior to the 1850s, Mississippi had extensive beaver populations in all counties, and beavers served as an important resource for humans. By the early 1900s, heavy trapping and hunting nearly caused extermination of the species in some parts of the U.S. and Canada. Legislation passed in the 1930s helped to restore the population from near elimination and while exact population estimates are unavailable, the beaver restoration program has been considered a success.

Over the past 30 years, as beavers have become more abundant, conflict with humans has followed. Beavers are the primary cause of considerable damage to timber in the southern U.S. because of their feeding activities and dam construction. Beavers strip bark from trees and fell many trees. Additionally, beaver dams can cause flooding over large areas, making trees more prone to rot and disease. One beaver dam can flood and destroy thousands of hectares of timber, and flooding caused by beaver dams can also cause timber plantations to be inaccessible to harvesting equipment.

According to a study Godwin helped conduct four years ago, for every dollar spent on beaver control, it saves between $40 and $88 dollars in resources, depending on the area.

"Our top priority is protecting states roads and bridges," Godwin said. "Saving timber is probably the biggest asset we would be protecting, followed by agriculture. Private property would probably be the fourth highest priority after that. All together, what we do saves hundreds of millions of dollars each year."

Typically in Lowndes County, Powell will trap the beavers and dig out the majority of dams they create.

"If it's something too big or something he can't get to, we'll bring in our trained explosive personnel to destroy the dam," Godwin says.

Although, in a sense her department has an adversarial relationship with the beaver, Godwin can't help but view them with a great deal of respect.

"They are ingenious in terms of how and where they construct their dams, the variety of materials they can use and the locations where they can get to," Godwin says. "They really are neat animals."

For all the damage beavers can do, their feats of engineering can also be a benefit humans in the form of increased wetland habitat, reduced downstream sedimentation, and improved water quality.

"Our goal isn't to remove beavers from the landscape," Godwin says. "What we want to do is manage them when they present water issues that pose a threat to roads, bridges or property."