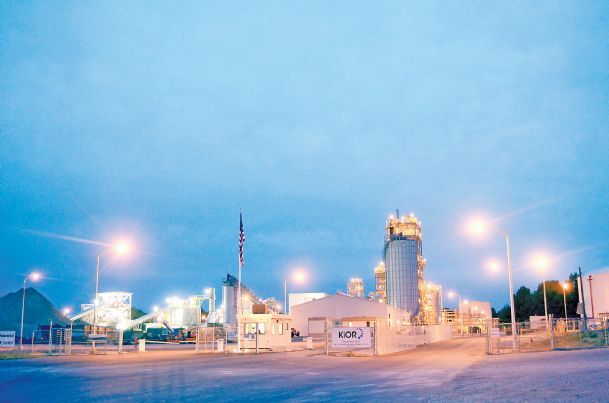 The Columbus KiOR facility is shown in this 2012 file photo. Photo by: Dispatch file photo

The KiOR plant site in Columbus has been purchased.

Cal Garland, whose company partnered with Georgia Renewable Power on the purchase, told The Dispatch this morning the plan is to install a wood chip mill at the site and send the chips to Ireland.

Steve Dailey, a vice president of construction with Georgia Renewable Power, however, said the company has agreed to remove the equipment from the site. He said plans for the future are still unknown, three days after the purchase.

Lowndes County Board of Supervisors President Harry Sanders confirmed the sale this morning. He said the 22 acres that KiOR built a biofuel refinery on was not part of the purchase. The land will revert to the Lowndes County Port Authority.

Derek Henderson, a Jackson attorney serving as receivership attorney in the matter, said the purchase was made for $2.1 million.

Lowndes County tax assessor Greg Andrews said KiOR's debt to the county, city and school district was $1,105,000 as of Oct. 1. Henderson indicated that those taxes would be made.

KiOR, a Texas-based business, built a $200 million biofuel plant on The Island that was designed to convert wood chips to fuel. The company struggled to make the facility operational, though, and it has not operated since late 2013.

KiOR's parent company, which is based in California, has filed for Chapter 11 bankruptcy reorganization. The Mississippi unit was not included.

KiOR owes the state of Mississippi approximately $69 million in loans. MDA officials did not respond to messages seeking comment this morning.

Sanders said that initially, Georgia Renewable Power officials said they planned to clear the site on The Island and sell the equipment that remains on the property.

"But I understand now that they want to operate a small chip mill there," Sanders said. "I'm not sure that the Port Authority will want to go that direction. I think the property has a lot more potential than a chip mill operation that might employ 25 people and be a $3 million to $4 million investment. It's up to the Port Authority to determine that."

Garland said Georgia Renewable Power still needs permits from the Lowndes County Port Authority to conduct operations in the Golden Triangle. If the company does not receive the permits, Garland said they will take the equipment and move operations to Alabama.

An auction for the KiOR property was scheduled for Oct. 15.