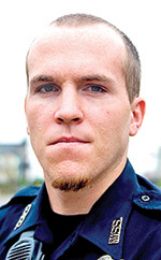 On the night of Oct. 16, Boykin, Branch and Young were in the police vehicle that initiated a traffic stop on a car Ball was riding in near the intersection of 22nd Street North and 15th Avenue North. Police Chief Tony Carleton has said the stop was initiated because of careless driving, no light above the license plate and lack of insurance. Ball fled the scene on foot. He was ultimately shot twice -- once in the upper body, once in the lower body -- and found laying roughly a block and a half away from the traffic stop. He died that night from blood loss at Baptist Memorial Hospital-Golden Triangle.

Authorities have said a 9mm handgun -- reported stolen from a CPD officers home in August -- was found near Ball. Narcotics, police say, were also found nearby. The Mississippi Bureau of Investigation is conducting forensic examinations on the narcotics and 9mm to determine if Ball ever possessed them.

Authorities have not said which officer shot Ball or if Ball shot at or threatened officers.

Last Wednesday, CPD officials said an unauthorized civilian was riding with the three police officers at the time of the incident. Authorities also said Boykin, Branch and Young were equipped with body cameras that night, but none of them activated the cameras prior to or during the shooting. All three officers have been on administrative leave since Oct. 19.

After the meeting, Gavin explained he did not necessarily disagree with the council's decision. However, he said Boykin submitted his resignation on Thursday. Gavin questioned if the city could fire someone who had already resigned.

"How do we fire somebody that's no longer working for the city? That's why I voted no," Gavin said. "Simply that, and no other reason."

Ward 5 Councilman Kabir Karriem said Boykin committed several violations, including having an unauthorized civilian in a patrol car with him, a body camera violation and social media policy violations for posts that were derogatory toward African Americans, women and disabled people.

Karriem said Boykin has faced body camera policy violations in the past. He also said the social media posts were made before the Oct. 16 incident.

Columbus Mayor Robert Smith said the council unanimously voted to suspend Branch and Young for 30 days without pay, effective immediately. After that, the officers will have six months' probation and will have to take police tactics training before returning to patrol.

Though the city is still awaiting the results of MBI's investigation into the incident, Smith said he didn't foresee that any further disciplinary action will be required.

"I feel good about where we are now concerning the action taken here by the mayor and council this afternoon," Smith said.

The council first met at 9 a.m. Friday to approve a parade permit for a march planned for Tuesday afternoon. Councilmen also began discussing personnel matters relating to the three officers in executive session for about an hour. The council then recessed until 2 p.m. to continue the discussions for about an hour and a half.

"We recessed because the police department is under civic service," Smith said. "Under civic service, you have to give them a notice and an opportunity to be heard. They can also have legal counsel if they would like to. We asked the chief if he would contact the three officers and talk to them to let them know we would like them to be here."

Carleton said the council's actions were an example of the department's disciplinary policies working.

"We put policies in place that are there for those corrective measures," Carleton said. "Any time it's brought to our attention, we're going to address those policy situations and deal with them. For us, it's about being transparent and to show the community we're here to serve them. We want the badge to represent public trust."

Carleton said it isn't necessarily unusual for multiple officers to be in a patrol car, depending on assignment. He also denied rumors that any of the officers involved in the incident were off-duty.

He did say, however, that unauthorized civilians are forbidden from patrol cars.

Authorities say the civilian in the vehicle was Alisha Stanford. Her presence that night has not been explained.

Smith said officials decided to change that after the community expressed doubts that the city would carry out a clean investigation.

"I think what was done here will ease some of the tensions and innuendo as far as the city handling it since we had our own officer involved," Smith said.