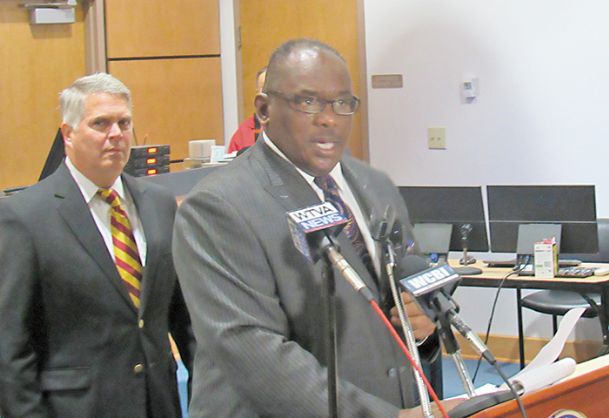 Tony Carleton submitted a letter of resignation to Columbus Mayor Robert Smith on Sunday announcing his intent to step down as the chief of the Columbus Police Department.

"At chief Tony Carleton's request, last night I met him in my office and he gave me his resignation letter," Smith said.

Smith said CPD patrol division Capt. Fred Shelton will be serving as interim chief until Carleton returns from Alabama on Wednesday. Assistant Chief Tony McCoy and Criminal Investigation Division Capt. Brent Swan are both out of town this week.

"Chief Carleton asked me if I would allow him the opportunity to first inform the council of his decision, and he informed the council this morning around 8 o'clock," Smith said.

The mayor said he was surprised to hear of Carleton's resignation. He said he nor his administration had pressured Carleton to step down in the wake of the Oct. 16 CPD shooting of 26-year-old Ricky Ball.

"I'm disappointed and was surprised when he called last night and said he wanted to meet with me," Smith said. "I had no idea. It was the last thing I thought that he would give me -- a resignation letter."

"I asked him if he's sure and he said, 'Yes,'" Smith told reporters Monday morning.

News of Carleton's resignation comes just three days after the council ordered three of his officers be disciplined for their actions during Ball's shooting.

One CPD officer, Canyon Boykin, was fired Friday for not recording the incident on his body camera, having a guest on an unauthorized ride-along at the time of the incident and violations to the city's social media policy with derogatory posts toward African Americans and women. Two other CPD officers involved -- Johnny Branch and Yolanda Young -- have been suspended without pay for 30 days for failing to activate body cameras during the arrest.

Police say Ball was armed with a 9mm at the time of the shooting. An incident report says he pointed the gun at officers.

The mayor did not attribute the shooting as the primary reason for Carleton's departure. Smith said he was unsure if the chief received pressure from other city council members to step down but that he did not believe that was the case.

Carleton was hired by Columbus in Sept. 2013 to take the assistant chief position after serving as chief in Tupelo for four years. He became chief of police in Columbus on June 10, 2014. He earned $73,500 a year as chief.

Smith said he anticipates the search for a new chief could begin as early as Tuesday night's city council meeting. He said the city will search for candidates locally and from around the country.

"We could either look inside or outside and I would hope that we would do a national search," Smith said. "And that's giving anyone from within an opportunity to apply as well as outside. I think you have better choices by doing it that way."

The mayor said Carleton has done a good job as chief in his tenure.

"When an incident of this magnitude occurs in any community there is some doubt among the media, there's some doubt within the citizens of the community also," Smith said. "Not only with the chief but with the mayor and council and the way they react to the situation."