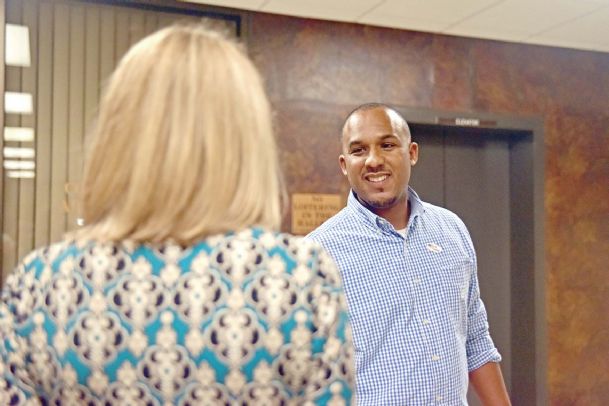 Colom on Tuesday garnered 53.9 percent of the vote across the four-county district, with 20,724 ballots in his favor. Allgood received 46.1 percent with 17,685 votes, according to unofficial results.

As of press time, these numbers reflect all votes with the exception of Oktibbeha County absentee ballots and affidavit votes.

On Tuesday night, in the hallway of the Lowndes County courthouse, as his victory became apparent, Colom beamed with delight and disbelief.

He said he believes he won by being truthful and passionate about his message of criminal justice reform.

"I think they really agreed with having better priorities," Colom told The Dispatch. "They've understood that sending non-violent offenders to jail for a long period of time is not productive for society and counter-productive for the individual. I had the courage to push that message. Usually, a district attorney doesn't run on that. Usually, a district attorney runs on 'tough on crime' like everybody else. But I had the courage to say what I thought was the truth and people responded to the truth as they often do."

Allgood, who ran as an independent candidate, did not return phone calls from The Dispatch this morning.

Colom said he will begin by finding a successful staff and building up programs he advocated on the campaign trail, such as pre-trial intervention.

"The first thing I'll do is look at personnel to make sure we got people who agree with my direction for the district attorney's office," Colom said. "But one of the major priorities I want to have is looking at the alternative programs that I talked about. Because I made a promise and I want to keep it."

Throughout his tenure, Allgood has been a staunch victim's advocate as a prosecutor. While the Colom campaign advocated new programs for non-violent offenders and alternative sentencing, Allgood maintained that several of those programs already exist.

Allgood ran on his record of experience and said his method of prosecuting has worked to keep the Golden Triangle safe.