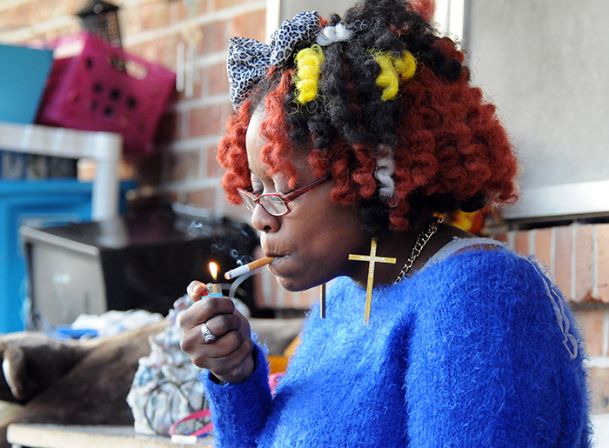 Shilica Rice, who lives at Connor Heights, lights a cigarette outside of her home Sunday. The federal government Thursday announced plans to ban smoking within 25 feet of any public housing. Photo by: Mark Wilson/Dispatch Staff

STARKVILLE -- When Shilica Rice wants to smoke, she steps outside her apartment and lights up.

On Sunday, Rice sat on the porch of her residence at Conner Heights, Starkville's federally subsidized housing complex, with a KOOL in her hand. She goes outside to avoid secondhand smoke affects on her mother and sister. But news that her efforts to leave the home might not be good enough for a new federal policy took her by surprise.

Last Thursday's federal government proposal to ban smoking inside and out of public housing nationwide got a decidedly mixed reaction from the people most affected.

Some who suffer from secondhand smoke were thrilled, but others, including some non-smokers, worried that it gives the government yet another reason to harass or even evict poor people for doing what would otherwise be a legal activity in the privacy of their homes.

The rule would ban lit tobacco products -- cigarettes, cigars, pipes -- in all residences, indoor common areas and administrative offices. Smoking also would be prohibited outdoors within 25 feet of buildings. Electronic cigarettes that emit vapor but not smoke would not be subject to the ban.

Smoking is already banned in about 20 percent of the nation's federally subsidized housing. The Department of Housing and Urban Development wants to extend that to the other 940,000 units around the country, in cities such as New York, Los Angeles, Atlanta and Miami.

HUD Secretary Julian Castro said a nationwide ban would protect more than 760,000 children and save about $153 million a year in health care costs, repairs and preventable fires.

"Everyone -- no matter where they live -- deserves a chance to grow up in a healthy, smoke-free home," said the surgeon general, Dr. Vivek Murthy. "There is no safe level of secondhand smoke."

The public now has 60 days to comment on the proposal, and the ban would take effect 18 months after the rule is finalized.

In Starkville, Rice, 26, knows that smoking is bad for her. She said she's cut back on cigarettes and started using a vaporizer. She's trying to quit.

"I try to step away from the kids when I smoke," she said. "I know the secondhand smoke is bad for them, that's why I smoke outside. But I don't see why we can't smoke on our porch."

Rice said many of her neighbors in the 50-unit complex also smoke cigarettes.

The policy will probably become part of each lease agreement, and enforcement will depend largely on complaints by other residents, HUD spokesperson Ed Cabrera said.

"Tenants who don't comply and continue to smoke could face possible eviction," Cabrera said. "One thing that we've stressed is that we're not targeting residents as a way to get them to quit smoking. We just want to make our properties smoke-free so they're safer for everyone."

Tommy Robinson, executive director of the Mississippi Regional Housing Authority IV, which oversees the 389 public housing units throughout Lowndes, Clay, Oktibbeha, Choctaw, Carroll, Grenada, Winston and Webster Counties, agrees with the concept of the policy. He just doesn't know how his office would be able to enforce the rule.

"HUD encouraged this a couple years ago, and we decided not to because of the enforcement issue," he told The Dispatch.

Robinson has worked for the Housing Authority in Columbus since 1981. He said this is the first attempted rule of its kind he can recall.

"This is a natural step to continue to spread the smoke-free protections that started with workplaces and then spread to restaurants and bars," said Michael Siegel, professor of Community Health Sciences at Boston University's School of Public Health.

But Jamila Michener, an assistant professor of government at Cornell University, called it a "misdirection of energy" that could lead to evictions. HUD would have more impact on public health by enrolling public housing residents in Medicaid, which covers smoking cessation services, she said.

But Robinson said it would be unrealistic to evict anyone over the smoking ban. He has around 35 employees covering a nine county area, and those people are busy enough without ensuring their residents are standing 25 feet from their home when they light up.

"We wouldn't have near the resources to do that," Robinson said.

He noted that he is legally obligated to give residents a three day advance notice of any unit inspection, which means those smoking inside would have time to stop before then. While Robinson supports the idea of reducing health risks, he knows enforcing the federal ban could be like trying to grab smoke.

The Associated Press contributed to this story.