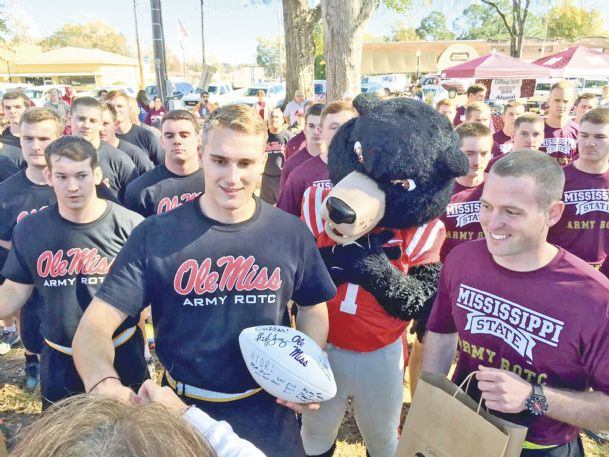 Members of the University of Mississippi and Mississippi State ROTCs are awarded gift bags by the Calhoun City Chamber of Commerce as they exchange the game ball for the Egg Bowl this Saturday in Starkville. This is the third year that the universityâs ROTCs have run with the football between Oxford and Starkville with the exchange taking place in Calhoun City. Photo by: Joel McNeece/Calhoun County Journal 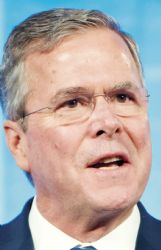 Mississippi State quarterback Dak Prescott might not be the most heavily guarded man in Starkville on Saturday.

Former Florida governor and Republican presidential candidate Jeb Bush will be flying in for the Egg Bowl this weekend, according to Austin Barbour, a Bush campaign advisor based in Mississippi.

The trip is less of a campaign stop and more of an opportunity to watch a SEC football game and interact with the people of Mississippi, Barbour told The Dispatch.

Bush will only be in the Magnolia state for a few hours.

"The plan is go straight to campus," Barbour said. "I believe he is going to stop by the College Republicans tailgate. He'll go walk through the Junction, meet and greet. Talk football, talk politics and then head over to the game with everybody else."

Bush has done this before.

Barbour, a well-known Ole Miss fan, said Bush won't be taking sides at the game. However, Barbour admitted that if Bush happens to be handed a cowbell, "I imagine he'd partake."

"We're just glad he's going to be here in Mississippi, it should be a lot of fun," Barbour said.

Mississippi's primary for the 2016 presidential race is March 8.