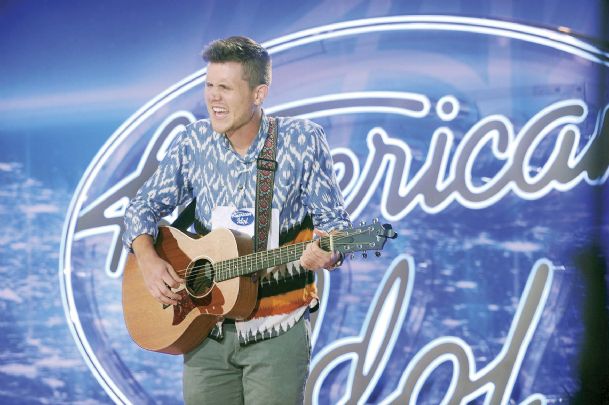 Trent Harmon, an Amory native, is heading to Hollywood to perform on âAmerican Idol.â Photo by: Courtesy photo

For the second year in a row, Amory has sent a local to Hollywood for the hit reality show, "American Idol."

Trent Harmon, 25, got his golden ticket to head to Los Angeles after performing for judges in Little Rock, Arkansas, on the FOX show's final season.

Last year, Amory native Priscilla Barker also went to Hollywood for the show but did not make it through the first round of cuts.

Harmon spent his entire life in Amory, where his family owns a farm and a restaurant. He grew up singing at the restaurant, passing around a hat -- he thinks it was probably a cowboy hat -- to collect money from audience members.

"When I was about 9, I realized that people will pay you money to sing," he said. "I would have happily done it for free, but I realized at a pretty early age singing at the restaurant that if you think you're serious, and you do a good job, they'll give you money."

The first memory he has of singing was in a talent show when he was around five or six.

"That's the first memory I have of being onstage," he said. "I'm holding the microphone and singing to people. My mom may have entered me in a talent show and I think I actually won. And then I never did another one again. It was kind of weird...I was a one hit wonder."

Despite never being in another talent show, Harmon sang throughout high school and college and still sings at church. He received a scholarship to the University of Arkansas at Monticello, where he did musical theater and lead worship services on campus.

Harmon sings a variety of music, but really likes Elvis Presley. At the audition for "American Idol," however, he wowed judges with a song he knew they'd probably never heard of: "Unaware" by R&B singer Allen Stone.

"I wanted them to see me singing something that I looked very comfortable playing...and singing, rather than just something that might be popular on the radio," he told The Dispatch. "It was risky, no doubt...but if I had to sing a last song before I were to die or something, that'd probably be the song I'd do. I just enjoy singing it."

The judges clearly enjoyed it, too. Between seeing him with his guitar and hearing that he grew up on a farm, they had expected to hear country music from him.

"Bar none, my favorite audition since we've started," said Harry Connick Jr., one of the judges.

Though he is glad to be heading to Hollywood, Harmon said being famous does not matter to him.

A two-hour episode of "American Idol" airs at 7 p.m. today on FOX.