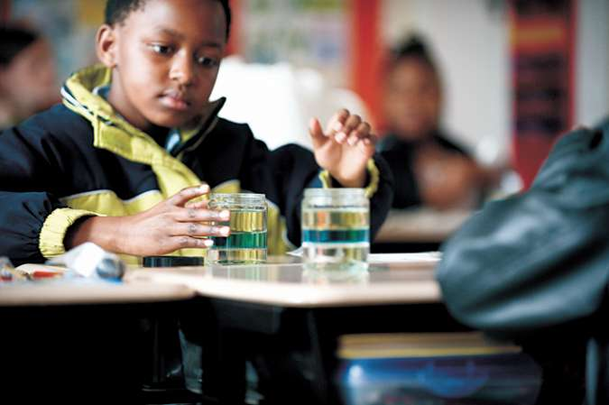 STARKVILLE -- As fifth-graders Kelsey Jones, James Travis and Matt Hutchinson sat together Monday morning in Nancy Sistrunk''s class at Ward-Stewart Elementary School, all three had smiles on their faces.

The group had just completed an experiment to see how high rubber balls with different chemical structures and properties would bounce; then they stretched pieces of plastic, with Jones and Travis rising to their feet and pulling hard until the material broke; finally, they were given little glass jarsÂ containing three different types of liquid -- oil, water andÂ Karo syrup -- and dropped in it items like broken toothpicks, cut-up pieces of a straw and metal BBs to compare their densities with the densities of the liquids. The items floated in the liquids with similar densities.

It was a class full of experiments,Â which taught students about polymers, the macromolecules that make up things in everyday life, from the students'' desks to their jackets to rubber on theÂ soles of their shoes.

For Jones, Travis and Hutchinson, it was an interesting way to spend a science class.

The lesson was taught by Dr. Keisha Walters, an assistant chemical engineering professor at Mississippi State University, and Jones'' reaction was exactly what Walters was hoping for. Walters taught the class as part of a cooperative effort with EPSCoR -- the National Science Foundation''s Office of Experimental Program to Stimulate Competitive Research -- a program with identifies, develops and uses academic science and technology resources to increase Mississippi''s research and development competitiveness, and supports academic growth.

The goal Monday was to increase interest in the sciences among school-aged minority and female students, Walters said. Ward-Stewart is 63 percent black, according to 2007-2008 estimates, which was the last school year for which statistics were available.

"The idea here is for these kids to say, ''Hey, I can be a scientist, too,''" said Katie Echols, head outreach coordinator for EPSCoR at Mississippi State.

Walters said she never had many women or minority science teachers growing up and that number continued to decrease as she went through her college years in biology and chemistry. She said she was encouraged at one time to go into nursing, not chemical engineering.

"That''s one of the reasons I do this," Walters said. "We have to get them engaged in this at an early age because, if they get to high school and they''re not interested in science, it''s too late."

"It was great," Travis said, noting his favorite experiment was dropping items in the different types of liquid. "I learned pretty much everything she taught."