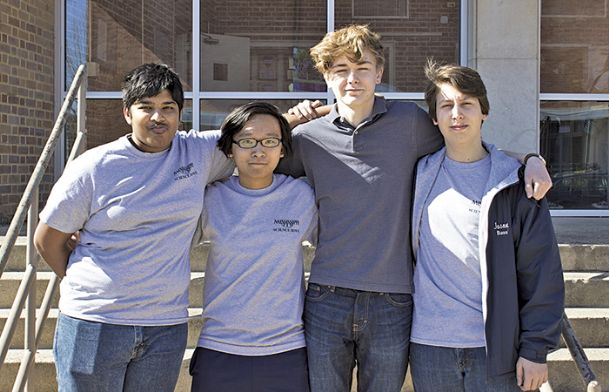 Mississippi School for Mathematics and Science students Dauttatreyo (Wrishi) Bandyopadhyay of Starkville; Nathan Barlow, of Starkville; Jason Necaise of Ridgeland; and Meilun Zhou of Oak Grove have been selected as candidates for the U.S. Presidential Scholar Award. Photo by: Courtesy photo

Four Mississippi School for Mathematics and Science students are among 4,000 candidates selected across the U.S. for their test scores and academic achievement to qualify for the U.S. Presidential Scholar Award, which recognizes the most distinguished graduating seniors in the nation.

Dauttatreyo (Wrishi) Bandyopadhyay of Starkville; Nathan Barlow of Starkville; Jason Necaise of Ridgeland; and Meilun Zhou of Oak Grove have been selected as candidates for the award, which is given to up to 161 students each year.

"We celebrate this success with the home schools of (the students)," MSMS Executive Director Dr. Germain McConnell said. "Realizing we are an extension of those schools and that they have played a significant role in the development of these students."

Scholars are chosen on the basis of their accomplishments in many areas, including academic and artistic success, leadership and involvement in school and the community. Candidates are selected, first based on their SAT and ACT scores by the U.S. Department of Education, and then by materials regarding their grades and academic achievement given as additional material by their corresponding schools.

Kelly Brown, MSMS Director for Academic Affairs, said this is the most amount of selected candidates from the school in recent history; last year two students qualified for the award.

"This is an unusually large group," she said.

Brown noted that all of the candidates scored high on their ACTs: Bandyopadhyay scored a composite score of 35; Necaise also scored a 35; Zhou scored a 32; and Barlow, whose father also attended MSMS, had the highest achievable score, a 36. Students complete the ACT prior to being admitted to MSMS, where they then look to perfect it. Last year the average score by incoming students was a 24.

All four will compete on MSMS teams at the Regional Science Bowl high school regional competition at Mississippi University for Women this Friday. The winner of that will represent the state at the 26th Annual National Science Bowl (NSB) in Washington, D.C.

Last year, a team from MSMS won the regional competition.