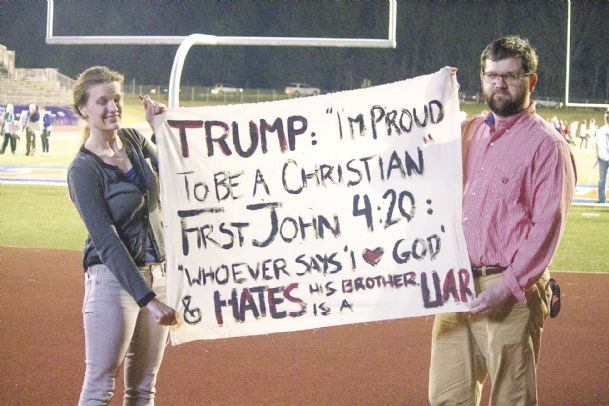 Republican presidential candidate Donald Trump speaks to a crowd of about 2,000 people in the Madison Central High School gymnasium on Monday.
Photo by: Alex Holloway/Dispatch Staff

At least 9,000 people showed up to Madison Central High School to see Donald Trump on the eve of Mississippi's Republican primary.

Trump is one of four remaining candidates in the Republican presidential field, along with Ted Cruz, John Kasich and Marco Rubio. On the Democratic side, Hillary Clinton is running against Bernie Sanders for the presidential nomination. Mississippi is holding voting for both primaries today. Voting is open from 7 a.m. to 7 p.m.

About 2,000 people crammed into the high school's gym, and Trump said an additional 7,000 watched from the overflow location in the football stadium.

Traffic clogged the road leading to the high school and there were so many people there that, even as Donald Trump took to the stage an hour and a half before the advertised 7 p.m. start, a packed house full of screaming supporters was there to greet him.

Even if his talking points were familiar, Trump's fans showed support with a fervor that at times seemed more SEC football on a Saturday in Starkville or Oxford -- and less a Monday-evening political rally.

From Trump supporters Monday night, a few repeating threads came to the fore. They liked that Trump speaks his mind, even if -- or especially because, for some -- he isn't polite or politically correct. They liked that he says he is not beholden to major outside donors.

And they liked that he seems to be succeeding outside the realm of the party establishment.

"The establishment sucks," said Carolyn Harrison, of Vicksburg. "They're afraid of him. That's why everybody's attacking him. He's the frontrunner and the party is trying to get him out. That's the kind of people they are. That's all politicians are. They don't want him in there because if he gets in there, their gravy train is gone."

Harrison attended the rally with Ruby and Danny Doty, both of Ridgeland. It was Harrison's first rally, but Ruby and Danny went to Trump's event in Biloxi in early January.

She said the businessman was even better the second time.

"He says what everybody wants to hear," Ruby said. "And I believe he's going to do it too."

Ronnie Moses is, as he put it, semi-retired from the insurance business. He's from Brandon and volunteers with the Trump campaign, and was easy to spot Monday night with a white New Year's party top hat with "TRUMP" written in all caps across the front.

"I'm just trying to help get this country fixed," he said. "We're broken, and Donald Trump seems to the best person to get it done."

Moses, like the several other supporters, said he likes Trump because he speaks in a way that's easy to understand. He said he likes Trump's promise to build a wall along the U.S.-Mexico border and to order out illegal immigrants.

"It's just the firmness," Moses said. "And the fact that he's not owned by the politicians, by the elite."

Not everyone at the event came to show support. No protesters were thrown out of the gym Monday night, but two--David and Erin White, of Jackson--stood near the end zone of the football field to protest Trump's religious claims.

They held a banner up that said "Trump: I'm proud to be a Christian. First John 4:20: Whosoever says I (love) God and hates his brother is a liar."

"You even heard him say tonight that he's a Christian," David said. "And yet he, without a thought, rejects the Syrian refugees, wants to register Muslims or keep Muslims out of the country."

Erin pointed out that she and David are Evangelical Christians, after Trump touted his support among that voting block during his speech. She voiced further concern over Trump's stumbling effort to distance himself from former Ku Klux Klan Grand Wizard David Duke last week.

They didn't arrive in time to make it into the gym, but even then, they hadn't decided if they would protest during the speech and risk getting thrown out.

They said everyone was generally cordial at the football field.

"There were however-many thousand people here and we only had two or three people say anything," Erin said. "I think there were a lot of folks here who don't necessarily support him but were just here for the spectacle."