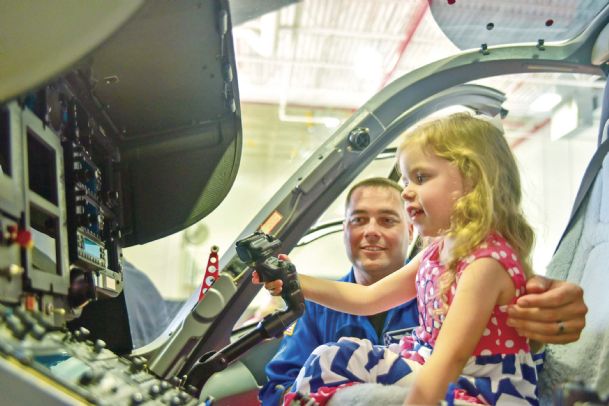 Jay Langford shows his daughter, River Langford, 3, the pilotâs seat in AirCare 3, a helicopter that the University of Mississippi Medical Center is basing in Lowndes County. The helicopter was unveiled at Airbus on Thursday. Photo by: Luisa Porter/Dispatch Staff

Dignitaries â along with Abby Williams, center â cut the ribbon for the unveiling of AirCare 3 on Thursday. Williams, 11, was flown by Airbus to University of Mississippi Medical Center in Jackson in December. The medical helicopter, operated by UMMC, is based at Airbus. It began operations April 1.
Photo by: Luisa Porter/Dispatch Staff

The University of Mississippi Medical Center on Thursday unveiled its newest transport helicopter -- AirCare 3 -- at Airbus Helicopters in Columbus.

AirCare 3, which was built by Airbus, began operations out of the Golden Triangle on April 1. It is UMMC's third transport helicopter.

The helicopter does not just transport patients to UMMC in Jackson, said Sam Marshall, operations manager for helicopter transport at both the Meridian base and the new base in Columbus. It it designed to provide critical care for patients in rural areas of the state, only transporting those patients to Jackson if necessary.

Not every rural hospital can afford to have the newest drugs or equipment that doesn't need to be used often, Marshall said. AirCare 3 has equipment and drugs that many hospitals don't so patients can get care even when they're miles from Jackson's medical center, according to Marshall.

"Everything that our emergency center ... can do, our guys can do," he said.

Those "guys" include crews with a critical care nurse and a critical care paramedic, as well as medical professionals with 90 days of training specifically for performing procedures and administering drugs to patients while in the back of a helicopter, Marshall said.

Marshall added that keeping the patient in the area is a primary goal and that the helicopters will not take patients to UMMC if there's a better medical option closer to home.

"If we can keep the patient in this area, that's exactly what we're going to do," he said.

Since it began operating in the Golden Triangle in April, AirCare 3 has been used at least 40 times.

At the unveiling, several people cut the ribbon for the helicopter, including 11-year-old Abby Williams of Mathiston. Last November, Abby had a brain tumor removed at UMMC. The next month she was transported back to UMMC via the helicopter based in Meridian when she began having seizures which doctors now think were a side effect of the surgery.

Abby's mother, Melinda Williams, spoke at the new helicopter's unveiling. She praised the helicopter for being able to fly in bad weather and the crew for helping her daughter.