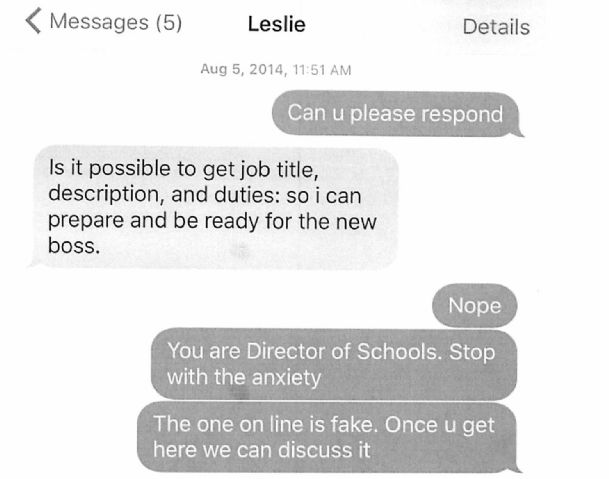 Pictured is a screenshot of a text exchange between Leslie Smith and Columbus Municipal School District Superintendent Philip Hickman included in federal court documents obtained by The Dispatch. 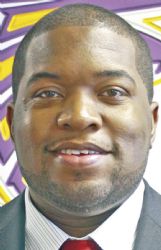 File: Complaint against CMSD and Hickman

File: Exhibits-Note: Pages 11 and 12 have been redacted to protect personal information of Leslie Smith.

The texts are included as exhibits in a lawsuit Leslie Smith filed against Hickman and CMSD in the U.S. District Court of Northern Mississippi for breach of contract, negligent misrepresentation and gross negligence. The lawsuit alleges CMSD reneged on an employment offer to Smith.

Hickman created the position shortly after he began his tenure as superintendent and recommended Smith for the job in August 2014, despite the fact Smith is an uncle to Hickman's wife.

The board voted 4-0 to hire Smith pending his receiving state certification. But after controversy erupted over Smith's relation to Hickman, the board received a letter Smith purportedly signed declining the position.

Smith claims in his complaint he never signed a letter and was denied the job. He is seeking $280,000 in damages.

Attorneys for CMSD and Hickman on Monday filed a motion for summary judgment to dismiss the case, primarily because Smith never signed a contract officially accepting the position. The judge has yet to rule on the motion.

The director of schools, Hickman previously said, would work directly with the district's nine principals and earn $70,000 annually.

However, the text exchanges entered into the court file show Hickman refusing to provide a job description upon Smith's request.

The two began communicating via text about the job in late July 2014, and Hickman began encouraging him to apply online so he could be recommended for hire. On Aug. 5, less than a week before the board meeting wherein Smith was approved for the post, Hickman tried to verify if Smith had applied and asked his uncle repeatedly if he would come to Columbus if hired.

"Is it possible to get a job title, description and duties: so I can prepare and be ready for the new boss," Smith texted.

"Nope," Hickman replied. "The position is Director of Schools. Stop with the anxiety.

"The one on line is fake. Once you get here, we'll discuss it," an immediately subsequent text from Hickman said.

In the motion for summary judgment, Hickman claims he immediately informed Smith of backlash to his hiring after The Dispatch published a story revealing their relationship on Aug. 12. The text messages in evidence support that claim, as well as the fact Hickman tried to meet Smith during a trip to Kansas City, Missouri, to obtain his letter declining the position.

Eventually, the motion states, Hickman picked up an envelope from another relative's home in Kansas City containing the signed letter Smith had reportedly left there.

Hickman did not return calls or messages for comment on Tuesday.

CMSD's director of schools position has yet to be filled.