Communiversity work about to begin 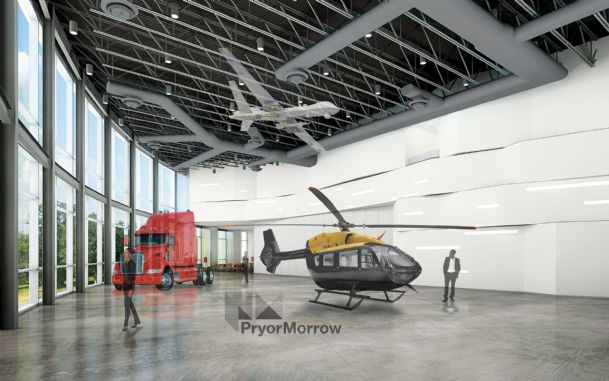 This rendering shows an interior space inside the East Mississippi Community College Communiversity. Construction on the project is set to begin later this year.
Photo by: Courtesy photo/PryorMorrow

Work on the East Mississippi Community College's "Communiversity" should begin this fall, if everything goes as planned.

Bid advertisements go out today, according to a project information release from the Columbus-based PryorMorrow architecture firm. Bids will be opened on Oct. 6, and EMCC Vice President for Administration Paul Miller said a construction contract should be awarded shortly after.

Miller said the project should have about a two-year construction period. He said EMCC hopes to have it open by fall 2018.

The Communiversity, formally known as the Center for Manufacturing Technology Excellence 2.0, will host manufacturing and technical training-based programs at a 30-acre site on Highway 82 in Lowndes County west of PACCAR.

In addition to general workforce training, area industries will be able to use bays at the site to train employees on their own equipment.

Chris Morrow, of PryorMorrow, said the base bid for the facility is 131,073 square feet, with 15 high bays that can be configured into training spaces, 15 classrooms spread across two floors and administrative facilities. Other bid options add as many as five extra high bays, bringing the facility's footprint to 145,638 square feet.

Morrow said the facility will also include a seminar room, food services and a large showroom where the Golden Triangle's manufactured goods, such as unmanned aerial vehicles, trucks and rolls of steel might be put on display.

Lowndes County donated the land for the Communiversity to EMCC. Golden Triangle Development LINK CEO Joe Max Higgins said the facility was originally planned to be built near the Golden Triangle Regional Airport, but the site was moved due to space restraints.

Higgins said the project has been fully funded since last fall, with $18 million from the state, $13.5 million combined from Clay, Lowndes and Oktibbeha counties, and roughly $6.5 million in federal funding from the Appalachian Regional Commission.

Since then, the project has gone through design preparations with oversight from the state.

Though dirt has not yet turned on the project, Higgins said the Communiversity is already getting attention from companies looking to possibly locate in the region. He said one particular company the LINK is courting has been impressed by the project.

"They said this is like having a major HR department in our backyard," Higgins said. "Think about that. It's somewhere you can go get people, somewhere you can send your people to be trained, retrained, upgraded in skills."

Miller said he's not surprised the Communiversity is already showing potential benefits to the region. He said it should allow EMCC to greatly increase its production of trained, qualified workers.

"We've got to find ways that we can grow so we can help the community grow," Miller said. "I think some of these selection site folks see this plan as a reality. They're helping the companies looking into the future and I think seeing what we're planning for that sort of a future helps clarify things."

Miller said the additional space at the facility, which is roughly two miles east of EMCC's Golden Triangle campus, will allow the college to expand the programs it offers at the main campus, such as the welding and fabrication program, or its allied health offerings.

"That's the bread and butter of what the community college should be," Miller said, " being there at the grassroots level of preparing citizens, whether it be for the foundation they need to go on into the university or help them prepare for the workplace."