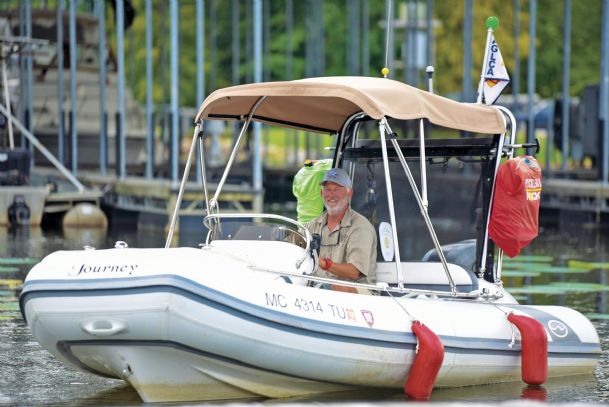 David Pike of Grand Haven, Michigan, stops at the Columbus Marina during his 6,000-mile journey on his dinghy. Pike will be playing pickleball in Columbus as he has in other towns on this adventure. Photo by: Deanna Robinson/Dispatch Staff

Dave Barron of Columbus, left, and David Pike show off pickleball paddles before their match on Thursday.
Photo by: Deanna Robinson/Dispatch Staff

Traveling 6,000 miles in a 15-foot dinghy is sure to place David Pike in a number of pickles.

A retired 67-year-old from Grand Haven, Michigan, Pike is using little more than a map, his boat "Journey" that he bought a year ago and a niche website to travel the eastern half of the United States and play pickleball with strangers. He's finding plenty of competition along his route, including a match with national pickleball ambassador Dave Barron in Columbus on Thursday.

After docking his boat at the Columbus Marina near the Lock and Dam just after lunch, he and the local headed to Elm Lake Golf Club on Taylor Thurston Road for the friendly match of what amounts to a miniaturized version of tennis using wooden paddles and an oversized whiffle ball.

"It's not even relevant who wins," said Pike, his face showing some signs of rueing the heat and humidity of the Mississippi summer afternoon. "By tomorrow, I won't remember the score anyway."

Pike took off from Grand Haven on Aug. 7 to travel The Great Loop, a series of connected river systems that will take him as far south as Florida and eventually back up north via other east coast states.

While as many as 200 boaters travel the Great Loop at any given time, Pike said, far fewer are trying to play pickleball in every state they dock along the way.

Using the USA Pickleball Association website to match him with registered venues and players close to his stops, Pike has brandished his paddles in Peoria, Illinois, Cape Gireaurdeau, Missouri, and Paducah, Kentucky, in route to Columbus, sometimes playing three days' worth of matches in one city. He plans to head toward the Gulf Coast for a few matches before making it to Fort Myers Beach, Florida, where he'll leave his boat for the winter. Then he'll start the second leg of his journey up the east coast.

During the winter, he plans to return to his seasonal home in Arizona...and play more pickleball.

"It's a very social game that allows people of various skill levels to play at the same time," Pike said. "I think that explains some of the growth in pickleball's popularity. As for me, I'm an amateur and a wannabe. But I love to play."

Going by the moniker "Dinghy Dave," he blogs about his journey and asks his opponents to sign one of his paddles for posterity.

Played on indoor or outdoor courts roughly one-third the size of a tennis court and using many of the same rules, pickleball can be played as either a singles or doubles game. The smaller court and underhanded serving endears the game to older players, like Pike, who can't well sustain the intensity of a conventional tennis match. However, as more youth enters the game, Pike said some of its players are becoming far more serious.

In fact, he said professional pickleball leagues are developing where would-be pro tennis players are becoming the stars.

"It's not just old people anymore," he said. "Young people are discovering it, and they're taking it over."

How Pike discovered the game

Pike retired from working for the state of Michigan in 2003, following a bout with cancer, and he and his wife bought a much larger boat to travel around the Pacific Northwest and Alaska. Ultimately, they moved back to Michigan but wanted to find a winter home elsewhere so they "would never have to shovel snow again." That brought them to Arizona about seven years ago where Pike discovered pickleball.

As he played, the tall, lanky Pike started to learn a very important lesson about sizing up his opponents: Looks can be deceiving and sometimes the least athletic seeming opponents can serve the largest pieces of "humble pie."

"You can't judge a book by its cover," he said. "I've been beaten by people I've looked at and thought, "Are you kidding me?

"I've learned about pickleball that the better you are, the less you move," he added. "I'm still moving all over the place when I play. Sometimes it can be a comedy."

The power of pickleball

Whatever bewitching power pickleball has on its most avid players, Barron and his wife Yvonne caught it 10 years ago while vacationing in Florida.

"Down there, you have to wait in line to get a court, but here people don't know about it, so it's just not as popular," Barron said. "I'd play pickleball every day if I had somebody to play with. ... I'm like David (Pike). I enjoy the social aspect of the game."

The Barrons, both also retired, live near Elm Lake. Dave said he used to teach a pickleball course at the Mississippi University for Women and still offers free pickleball lessons at Elm Lake Golf Club for anyone interested. That interest spikes in the fall and spring, he said, when it isn't so hot. But in the summer, it's slim pickings.

Having Pike come into town, a convergence of equally passionate pickleball player and traveler with fantastic stories to share, made Barron's day.

"It's very cool," Barron said as he cracked a subtle smile.

"I would give up golf any day to play this game," he said.

Pike said his new friend might not have to wait long for pickleball to catch on with more people in Mississippi.