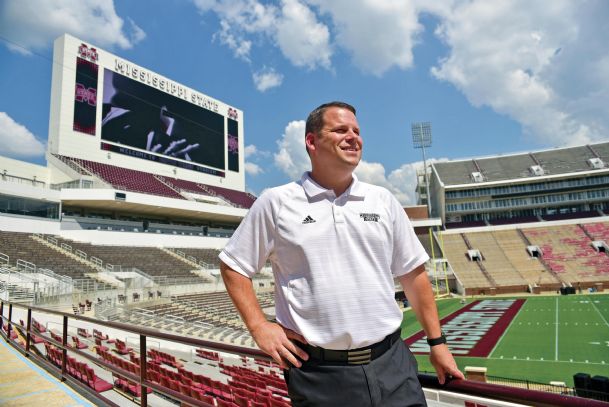 Scott Wetherbee, Mississippi Stateâs assistant athletic director for external affairs, says the massive video boards at Davis Wade Stadium not only enhance the game-day experience for fans but serve as a much-needed source of revenue. Photo by: Luisa Porter/Dispatch Staff

STARKVILLE -- Mississippi State will open its 2016 football season Saturday at home against South Alabama and most Bulldog fans will be watching on TV -- even those at Davis Wade Stadium.

When MSU erected its enormous high-definition video board at the south end of Davis Wade Stadium in 2008, it marked a transformational moment in what college and pro marketing officials refer to as the "Game Day Experience."

Last year, as part of a $75-million expansion/renovation of the venerable old stadium, a second video board of the same dimensions was added above the north end of the stadium. Each measures 112-by-48 square feet. That's 14,240 square feet combined, the most in any college football stadium in the U.S.

Throw in a five-ton sound system linked to the video boards, and the fan experience is a far cry from what Tommy Johnson recalls when he first started going to games. From "The Junction," where MSU fans gather to tailgate before games, to the amenities inside the stadium -- concession stands, restrooms and even the seats themselves -- the entire experience is fundamentally different.

"And you don't even have to go back that far," Johnson added. "If you suddenly woke up 15 years ago and went to Davis Wade Stadium, you wouldn't even know where you were. It's changed that much."

Towering above all those changes and renovations are, quite literally, the two video boards, which have become not only the focal point of entertainment but a significant source of revenue.

"They are hard to miss, aren't they?" said Scott Wetherbee, Mississippi State's assistant athletic director for external affairs. "Certainly, we have to make that a big part of our game-day experience. What we didn't want it to be was a TV screen where people were watching the game on the screen instead of the field. We want the boards to enhance instead of dominate the experience."

That might be the only "failure" that can be attributed to the video boards, if Johnson is any measure of it.

"You try not to watch the game on the screens, but sometimes it's hard to make yourself look away," Johnson said. "I mean, I try to watch the game on the field -- that's the whole point of going to the game. But when there's a key play in the game, one you really want to see, it's pretty hard not to look up at that big screen. I remember. I used to take binoculars to the games. There's not much point to that now. All you have to do is look up at those screens. You see everything perfectly."

The revenue aspects were immediately obvious when the first board was erected. Back then, the board featured regular advertising of the sort one might see on TV.

"We realized pretty quickly that we wanted to go a different direction with our advertising," Wetherbee said. "Now, the advertising is more geared to sponsoring features about players, the history and our university with the kind of videos that engage our fans and add an element of fun. During the course of a game, we'll have probably 100 sponsored features on the board, but we have managed to do it in a way that fans don't feel like we're throwing 100 ads at them."

Wetherbee said that is achieved with through collaboration with MSU's partners.

"We have a contract with Bulldog Sports Property, which is owned by Leerfield Sports, and they sell all of our sponsoring on the boards. It certainly generates revenue, which has become very important to our bottom line. And, of course, those sponsors play a huge role in it, too, because they have been willing to listen and change their philosophy, as opposed to just staying with a typical commercial."

"It evolves and changes from year to year," he said. "You have to keep things fresh and give the fans something new."

Last year, it was the addition of "tweets'' that scroll across the bottom of the screen, starting during pregame and continuing when there were breaks in the action.

"Using Twitter on our video boards is actually pretty complicated," Wetherbee said. "You would think it would be pretty easy. It's not."

To implement Twitter into its video board production, MSU employs a company that has developed an algorithm to scan the millions of Twitter posts and capture those related to MSU. The tweets are sent to a queue where MSU employees review the them, careful to screen out any which might contain inappropriate messages or images that an algorithm cannot detect.

"I think it's been wildly popular," Wetherbee said. "It's probably one of the more interactive things we do. I know when my wife and kids go to a game, they tweet pictures of themselves and they're always looking up at the video board to see if there tweet is going to be shown. We probably put 100 or more tweets up there during a game. Our fans have really gotten in to it. Now, it really is a 'thing' for us."

'It takes a lot of people'

Likewise, operating the video boards is not so simple as it might appear.

"It takes a lot of people working together to do what we do on Saturdays," Wetherbee said. "We have eight people in our control room, doing everything required for what's going up on the boards -- a technical director, replay, graphics, engineer, producer.

"Then we have four cameraman who capture all the images around the stadium," he added. "Then there are the people in our marketing department who are constantly in touch with the camera operator and the control room. A lot of times, the marketing people are the eyes and ears. They see what's going on around the stadium that we might want to focus on.

Production-wise, Wetherbee said Bennie Ashford, who has been here in TV production for more than 20 years, and Stefan Tribble are the "two man guys." Tribble was an MSU student who went on to work for ESPN.

"He worked in the control room for 'Sports Center' and 'NFL Live,' so he brings a lot of experience to the job," Wetherbee said. "We feel like we have a really good team, and I think it shows in our product."

Johnson, like many long-time fans, may be a traditionalist in many respects.

But he's sold on the atmosphere the video boards have added to MSU games.

"It's almost like you are at a carnival at times," Johnson said. "It's incredible. Very entertaining, especially for the kids."