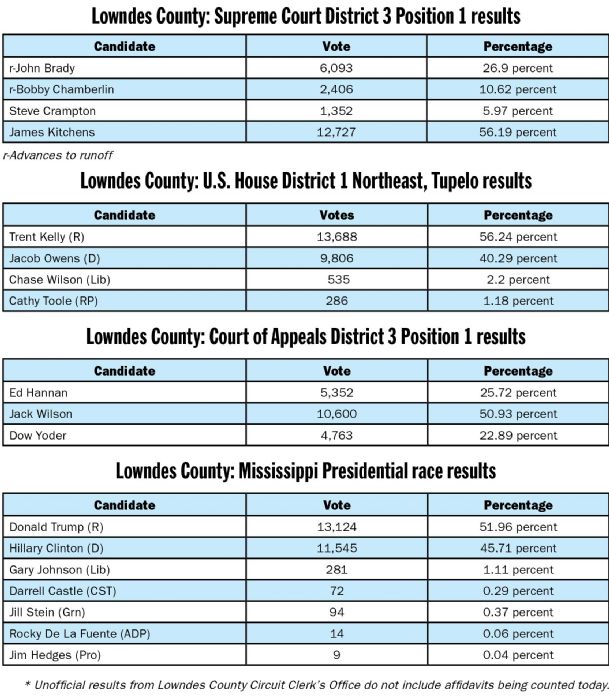 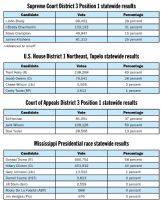 Bobby Chamberlin and John Brady are heading to a Nov. 29 runoff for a seat on the Mississippi Supreme Court.

Brady, a Columbus attorney, and Chamberlin, a judge from Hernando who serves on Mississippi's 17th Circuit, received the most votes out of four candidates vying for the District 3, Position 1 seat. The candidates competed with Jim Kitchens of Caledonia, a judge for the Mississippi 16th Circuit, and Tupelo attorney Steve Crampton.

Kitchens carried Lowndes County with 12,727 votes (56 percent). Brady came in second locally with 6,093 votes (26.9 percent). Chamberlin received 10 percent, and Crampton pulled in 5.9 percent. The total does not include affidavit ballots.

"I'm honored that the people of North Mississippi have chosen me," Chamberlin said. "I appreciate the support across the district and hope to be given the honor of serving on our Mississippi Supreme Court."

Brady said he was happy with Tuesday's results and is looking forward to continuing the campaign for the seat.

"I'm very pleased to be in the runoff," Brady said. "I look forward to continuing to campaign and continuing to get the message out that we need conservative Christians on the court who will fairly apply the law to facts and not legislate from the bench."

Brady noted that getting out the vote will be crucial going forward, because the presidential election will no longer draw high voter turnout for the runoff.

"With the presidential election, we saw good turnout," Brady said. "In three weeks with this and probably in some counties a court of appeals race, it's going to be hard to get people to the polls. Now that we have name identity, the key is getting the vote out."

Kitchens and Crampton did not return calls for comment by press time.

The Mississippi Court of Appeals District 3, Position 1 race was undetermined as of Wednesday morning.

Wilson carried Lowndes County with 10,600 votes, or 50.9 percent. Hannan received 5,352 local votes, or 25.7 percent. Yoder received 4,763 votes, or 22.8 percent. The total does not include affidavit ballots, which will determine if the race will require a runoff.