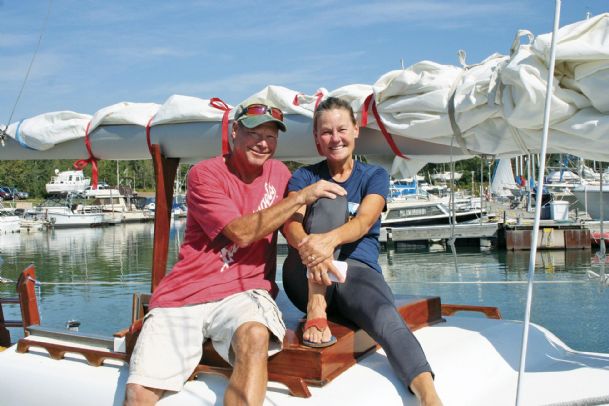 Dave and Beth Rogers of Minnesota are among at least 55 âloopersâ to visit Columbus during their journey along the Great Loop. Photo by: Courtesy photo

Beth Rogers takes photos while aboard âMysticâ at the Columbus Marina. She and her husband are âloopersâ journeying a large portion of the country by boat.
Photo by: Courtesy photo

When Dave and Beth Rogers arrived in Columbus Nov. 2, they hadn't set foot on land in a week.

The Minnesota couple had been sailing south since early September when they set off from Lake Superior. They spent a month on the Great Lakes then went from Chicago to the Mississippi River, up the Ohio River about 60 miles onto the Cumberland River, then onto the Tennessee and Tombigbee.

They're loopers -- people who cruise the waterways of the eastern half of the country, quite literally looping from the Great Lakes north of Michigan down the Mississippi, around the Florida panhandle, up the east coast and then circling back west somewhere north of New York, depending on which route they take. Adventurers and boaters from all over the country start at whatever body of water is closest to them and make the trip, which takes an average of a year.

The Rogerses had wanted to make the journey since they met about 30 years ago. Now they're finally making their dream come true on their 50-year-old fully restored sailboat, "Mystic," which they bought in 2012.

"We feel really blessed to be here and to be doing it," Beth said. "Even on a bad day, it's better than showing up for work."

And one of the stops on America's Great Loop: the Columbus Marina.

A destination for loopers

Marina manager T. Caldwell has seen the loopers come and go. They're almost all retired -- the odd 30-year-old who comes through probably inherited a lot of money, he said. They range from "super rich to just getting by" and arrive in everything from kayaks to yachts.

About 120 boats make the loop per year, Caldwell said, though he doesn't know if all stop at the Columbus Marina. He doesn't keep track of which boats docked at the marina are carrying loopers, but if he guessed at least 55 have come through this year alone. The marina was particularly crowded with loopers about a month ago, he said.

But the loopers know about Columbus. Dave and Beth learned about the Friendly City from a water guide for loopers, which gave them information on the city's antebellum homes, restaurants and more.

That's not unusual for loopers who dock for a day or two at the marina, Caldwell said.

"Most of them get our courtesy car, and they go to town and eat and buy groceries and go visit some antebellum homes," he said. "They've been doing it for 16 years, I guess since the marina's been here."

Nancy Carpenter, executive director of the Columbus-Lowndes Convention and Visitors Bureau, said Columbus is becoming more of a tourist attraction for loopers who hear about the city's warm weather and hospitality. They like touring the homes and walking trails, she said, and most of them like biking.

And they have great stories, she added.

In the three days the Rogerses spent in Columbus, they toured the Tennessee Williams Home and strolled along the Riverwalk.

"We love to explore new places," Beth said. "And the town we live in in Minnesota is a historic town, as well. So we really enjoyed our walk through town."

Dining out is a special treat for people who often cook their dinners on the water, Dave added.

"Of course the food in Columbus -- everybody talks about the places you have to go to," he said. "You definitely do have some really good restaurants."

One day at a time

Dave and Beth plan to return later this month to pick up Mystic, which is docked at the Columbus Marina while they spend a couple of weeks in New York City taking a break from the trip. When they resume, they'll head to Mobile and then on to Key West and the Bahamas -- "chasing warm weather," they said. They plan to be cruise for at least a year -- though the good thing about the trip, Beth said, is that they don't have to follow a schedule.

Dave put their speed at seven miles per hour, traveling about 50 miles per day. They're constantly watching the water for debris or checking depth. They've been trying their hands at photography. At night, they watch the stars.

"Almost all loopers are retired," he said. "If not from their work then they're retired from life and have dropped out for a while and don't really have a schedule or plan. And they just take it one day at a time. We kind of have the same attitude. We're in no hurry."