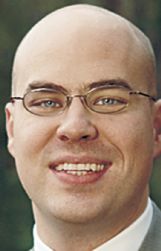 STARKVILLE --Parker Wiseman will conclude an eight-year stint as Starkville's mayor on June 30 when he steps away from local politics.

Wiseman, who was elected mayor in 2009 when he was 28 years old, confirmed to The Dispatch he will not seek a third term in next year's municipal election cycle.

The mayor's decision is twofold: Wiseman, now 36, said he has accomplished a large amount of the agenda he set when entering public service seven years ago and now he and his wife, Lindsey, are expecting their third child this spring.

"It hasn't been an easy decision at all, because I really, really love the job. This is something that Lindsey and I have talked about a lot, because this is a job that requires tremendous sacrifices from the whole family," he said. "The only way I know to do this is with a full heart in pursuit of an agenda I feel passionate about. I just have very mixed feelings right now about the future, because I think it's time for me to make sure I can give my family all the time I can.

"We set an agenda ... and I'm proud of those accomplishments, including having a thriving downtown, developing a high quality of life in the community, strengthening local and regional partnerships and upgrading our city facilities," Wiseman added. "By in large, we've accomplished what we've set out to do."

Wiseman's breakthrough in local politics came when he and former Alderman Matt Cox knocked former Mayor Dan Camp out of 2009's Democratic Primary. Wiseman would secure his party's nomination for mayor in a runoff against Cox and go on to beat Oktibbeha County Republican Party Chairman Marnita Henderson in that year's general election. As an incumbent in 2013's municipal cycle, he fended off a challenge by Republican Dan Moreland.

Seen as a rising star in the state's Democratic Party, Wiseman touted Starkville's successes as he gave the party's 2014 response to Gov. Phil Bryant's State of the State address.

Wiseman did not close the door on future political ambitions but said he has no plans to seek higher office at this time.

"I felt like I needed to fully make this decision before trying to determine what's next," he said. "I certainly, as a private citizen, will continue to have my opinions about political matters and express those when I see fit. I wouldn't rule out sometime down the road seeking office again. It's not something I plan to do immediately, but it's something I'm sure I'll be interested in at least looking at."

Also since 2009, the city was named as a top five restaurant growth market in the U.S. by Restaurant Business magazine, one of eight Great College Football Retirement Cities by Where to Retire magazine and one of America's Best Small Town Colleges by Bestcolleges.com.

As of press time, no potential mayoral candidates from either the Democratic Party or the GOP have committed to running next year.

Wiseman is the second Starkville incumbent to announce an upcoming departure from politics. First-term Ward 5 Alderman Scott Maynard will also step away from his position in June.