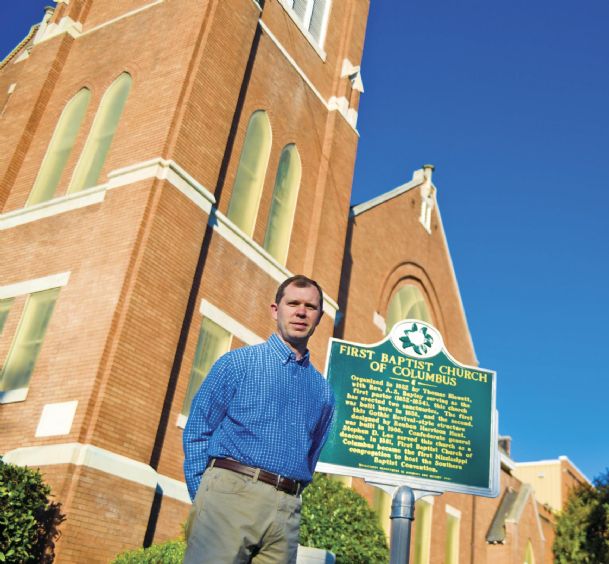 Shawn Parker is the pastor of First Baptist Church of Columbus. The church is selling its buildings and property downtown, which it has had nearly 200 years, and is planning to build a new sanctuary and church buildings on Bluecutt Road. Photo by: Deanna Robinson/Dispatch Staff

A "For Sale" sign has appeared in front of First Baptist Church of Columbus downtown.

Begun in 1832, the church is one of the city's oldest, and the current sanctuary on the 200 block of Seventh Street North is more than 100 years old. The First Baptist congregation has attended service in that spot for almost 200 years.

"It's one of those iconic buildings in the downtown area," said Shawn Parker, who has been the pastor at First Baptist Church almost 14 years. "People love it. Of course, there have been a lot of people who have attended service here. Many people have gotten married here. Many people have had funerals for loved ones in the sanctuary. So that adds a lot of personal sentiment and spiritual richness to the building."

The property and buildings have been for sale for several years. The church officially decided to sell the property and move into a new space on Bluecutt Road in 2005, Parker said. Crye-Leike Properties Unlimited is marketing the Seventh Street property for an asking price of $1.5 million.

Still, it may be years before the property and four interconnected buildings are sold, said Parker and Crye-Leike Properties owner Hilbert Williams.

The property is being marketed to every church in the Columbus area, said Williams, particularly those that may be outgrowing their current space. But it could also go to individuals or an organization with an interest in history. Williams and his business partner Rick McGill have sold other historic buildings in the area and think selling the First Baptist property will continue to be a slow process.

"It takes a special group to buy a church like that from a historical standpoint," Williams said. "You have to have vision."

The church's first sanctuary was built on Seventh Street from 1838-40 and stood through the Civil War and Reconstruction before it was finally torn down in 1908, said church historian Fran Fuqua. The current sanctuary was built in its place. Since then, the church has built three more buildings on the block.

The church has seen its share of Columbus history, Fuqua said. She preserves the building's old photographs and letters and knows plenty of its stories.

One such story is of First Baptist's ninth minister, Thomas Teasdale, who wanted to build an orphanage for children whose parents died during the Civil War.

"He was going to sell Southern cotton to the North and use that money for the orphanage," Fuqua said. "But he had to get permission to cross the line."

Luckily for Teasdale, who had traveled and lived all over the United States, he happened to know both Union president Abraham Lincoln and Confederate president Jefferson Davis. Both presidents signed a letter granting him permission to cross the border that divided the Confederacy from the Union.

"It's the only document in American history signed by two presidents," Fuqua said.

The letter itself now belongs to the Colgate family, whose name is associated with the Colgate corporation that sells hygiene products, Fuqua said. As for the orphanage, the war ended before Teasdale could build it. But he remained a supporter of orphanages his whole life, she said.

Looking to the future

It's the quieter history, though -- the marriages, baptisms and funeral services -- of ordinary people who worshiped there that make the church special, Parker noted.

"I think you will find a range of emotions, but probably the overwhelming emotion for most people who've been in the church for a while is bittersweet feeling," Parker said. "I think there's great love for the history of the church. The history of the church is so connected with this location, this building. At the same time, I think there's a lot of excitement about the future and the potential and the possibilities of a new facility.

"It has come to mean a great deal to me," he added. "I have spent a significant percentage of my life here. ... I've delivered a lot of sermons in the sanctuary. I've performed weddings for some very special families and I've officiated funerals for a lot of very special friends."

First Baptist Church now has a range of accessibility issues, Parker said. There are too many steps and not enough elevators. The new building on Bluecutt will not have those issues, Parker said, and will include the latest technologies. Otherwise, he hopes it will be architecturally similar to the sanctuary on Seventh Street.

As for the Seventh Street buildings themselves, the congregation at First Baptist will continue to use them as they build on Bluecutt.

"To be quite frank, when it moves, I'll be sad," Parker said. "But at the same time I am extremely excited about the future of the church."