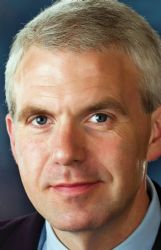 As Southern Cross Transmission inches closer to submitting an official proposal with the state for a major transmission line project, Public Service Commissioner Brandon Presley said he wants Mississippi to get the most possible benefit.

Otherwise, he said he won't support the project.

Southern Cross, a subsidiary of Pattern Energy Groups, plans to build the 400-mile, 500-kilovolt wind power line from west Louisiana to east Mississippi. Though the project may not ultimately come to the Golden Triangle, possible routes show the line could cross through Lowndes, Oktibbeha or Clay counties, ending with a $300 million converter station in Caledonia. The project could create about 300 construction jobs.

The company is expected to submit a final proposal for the route to the Public Service Commission by year's end. The commission must approve the plan before it can move forward.

Presley, who represents Mississippi's Northern District on the commission, laid out three criteria on Monday the project must meet to get his vote on the three-member board: the company must build the converter station in Mississippi, offer Mississippians some sort of access to the power running through the transmission lines and give Mississippi contractors a fair shot at the labor contracts.

Presley said the project must treat Mississippi as more than a "pass-through state" on the way to selling energy on the East Coast.

"To me, the trade-off is if you want to come in and do this, we'll look at it, but you've got to meet a public interest burden," he said. "The burden for that is what does the state of Mississippi -- what do we get out of it? Are you just coming through our area or are we going to see development and real job growth?"

Presley said it's vital that the project, if approved, use local labor. If it cannot, he said Southern Cross must explain why.

"Go out and try it," he said. "Try to find our people. We've got some of the best companies in the United States in this state, and you've got a lot of local people who have done this type of work. But the burden should be on the people making the money to explain to us why, in fact, they couldn't use local people."

If it's discovered that the state lacks qualified workers or is otherwise workforce deficient, then Presley said that needs to be used as a learning point for educational institutions and state agencies like the Department of Employment Security. But Presley said he believes strongly that Mississippi has the people who have the skills to build the project.

"It's an extremely high priority," Gibbes said. "That's part of our plan. To the largest extent possible, we plan to hire local."

Southern Cross has hosted a pair of vendor fairs, one in Winona and another in late October in Columbus. Gibbes said Southern Cross might host more in the future. The company also has a portal on its website that allows vendors -- whether construction, lodging or other services -- to enter their information.

Gibbes said all of the info, whether gathered from the website or in-person at the vendor fairs, is entered into the same database.

So far, he said Southern Cross has drawn interest from about 100 contractors.

"It's not just construction," he said. "It's everything from hoteliers and food service providers to folks who service fleet vehicles. It's broader than you would think. This is a $1.4 billion project across two states. It takes a lot of different skill sets to bring that all together."

Presley also said it's critical the converter station -- the most expensive individual part of the project that's planned for Mississippi -- be put in Mississippi. He said there had been some consideration of putting the station in west Alabama, though the idea seems to have faded.

"If a company's looking just to come and go over our land and make the biggest piece of the investment in another state, they're going to have a hard time convincing me that's a good deal," Presley said. "To me, that's a non-starter."

Further, Presley said he'd like Southern Cross to reserve 12.5 percent of the line's capacity, or about 250 megawatts, and allow Mississippi utility companies first right of refusal to that power. The new power source could also provide renewable energy to about 22,500 homes, he said, and add to the 225 megawatts the state can access from solar energy. Adding those sources to conventional power capacity could help maintain lower energy prices.

Presley said he also does not want Southern Cross to go seeking local tax exemptions from counties for the infrastructure investment.

"If the county board of supervisors wants to give an exemption, that's one thing," he said "But don't come and sell it to us that we're going to create all this taxable income when you're just going to go to local authorities and try to get it tax exempt.

"If you're going to come through our state, you need to pay your fair share," he added.