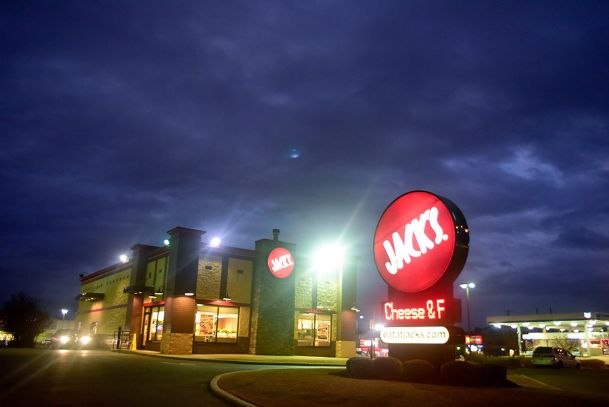 Mississippi Department of Health is investigating a reported incident from earlier this month at Jack's on Highway 45 in Columbus where an employee allegedly rubbed blood on a burger that was served to a customer. Photo by: Luisa Porter/Dispatch Staff

A viral Facebook post that claims a Columbus restaurant worker wiped menstrual fluids on and licked a food order before delivering it to a customer has led to two investigations.

Todd Bartmess, CEO for the Birmingham, Alabama-based Jack's Family Restaurants, Inc. confirmed Wednesday the company is investigating the incident that reportedly happened Saturday evening at the Jack's location on Highway 45 in Columbus.

"Food safety is our No. 1 priority and we are investigating this," Bartmess told The Dispatch. "We want to talk to everybody involved, get their stories and find out what happened. We take these kinds of things very seriously."

A Mississippi Department of Health representative has confirmed the department is also investigating the incident.

News of the incident first emerged from a Facebook post by Tabatha Hollins of New Hope, whose 16-year-old daughter, who was also an employee of the restaurant, saw the alleged offense and told her mom.

The 16-year-old claims she was fired Tuesday due to reporting the incident. Hollins then took to Facebook.

"My daughter saw another worker put her (menstrual fluids) and lick cheese that went on a customer's burger. My daughter told the (assistant manager) that was on duty and the (assistant manager) still brought the food out to the customer!!! We called the store to try and talk to the general manager and they wouldn't give her the numbers to get a hold of a manager. We then called corporate who again did nothing!! They called my daughter in (Tuesday) and told her she was to resign or quit when she asked why they told her because her family made false reports!" her post reads.

Hollins said the incident happened between 10 and 10:30 p.m. Saturday.

The post also contained a cell phone voice recording, which Hollins said was a conversation between her daughter and the employee who defiled the sandwich. In the recording, made a day after the incident, it seems the employee admits to the act.

The employee in question, who The Dispatch is not identifying because she is a minor, could not be reached for comment Wednesday, and her Facebook page appears to have been deactivated.

It also captured the attention of the Mississippi Department of Health.

"Wednesday morning, we became aware of some Facebook chatter about an alleged incident," said MSDH Director of Communications Liz Sharlot. "It was enough of a concern for us that we sent out an investigator to the restaurant to begin investigating what we considered an alleged incident of intentional contamination. We'll do a thorough investigation, and if we find it was intentional contamination, we'll inform law enforcement.

"We're a long way from that at this point, though," she added. "We'll examine the restaurant and interview a lot of people to try to determine what happened."

Sharlot said no official complaint had been filed with the health department.

Columbus Police Chief Oscar Lewis said his department was aware of the incident but would not investigate until a criminal complaint is filed.

Bartmess confirmed to The Dispatch that Hollins' daughter was "no longer an employee" of the company for "reasons not related" to the incident.

He said he became aware of the audio recording after Hollins' daughter was terminated.

Hollins said neither she nor her daughter had been contacted by either the company or the health department as of Wednesday afternoon. She said she called the corporate office to report the incident.

"They took down my name and address and said someone would get back to me, but I never got a call," Hollins said.

Hollins' daughter said she was called into the restaurant Tuesday afternoon, where she was terminated.

"I was beginning to tell them that I had a recording of (the other employee) admitting what she had done to the burger," the daughter said. "They said, 'We're not worried about that,' that it had been handled. They said I was fired for a false report, that my family had filed a false report."

Hollins said she feels her daughter was treated unfairly.

"If they had fired everybody who was involved, I could understand that because everybody was at fault. My daughter could have grabbed the bag and thrown it in the trash. I wish she had done that. But she's 16, and who knows what you would do in that situation?"

"There's a woman out there, the customer, that doesn't know what happened to her. She's the victim. It's just sickening."