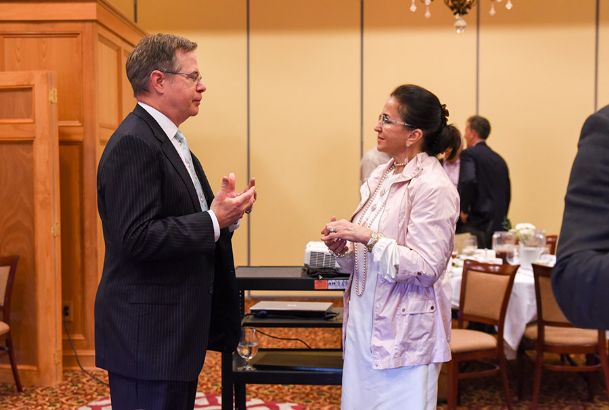 University of Mississippi Chancellor Jeff Vitter told Columbus Rotarians on Tuesday that nothing is more vital to the state's future than higher education.

Vitter, who has served as chancellor for a little longer than a year, said the university is improving on several fronts, from growing enrollment to record-high ACT scores and grade-point averages for incoming students.

However, Vitter said the University of Mississippi -- and all universities in the state -- must grapple with the reality of tightening state budgets.

"We're being cut to the bone, frankly," Vitter said during a presentation at Lion Hills Center. "It's something easy to lose. It's hard to build once you lose that. I heartily believe that there is nothing more important to the future of our state than higher education because it is what creates opportunities and it is what attracts businesses and starts new businesses in our state."

During a brief question-and-answer session following his presentation to the Rotary Club, Vitter encouraged people to contact state senators and representatives and ask them to continue supporting Mississippi's higher education institutions. He also said, while next fiscal year's budget has yet to coalesce, early indications are "not a rosy picture."

The University of Mississippi, along with the state's seven other public universities, play important roles not only academically, but in economic development, he said. Part of the way they do that is by attracting out-of-state students who act as a "brain infusion" to help improve the state.

"Mississippi, as a state, gets the benefit of students that they did not have to pay K-12 education costs for," Vitter said. "It's actually the cheapest route to well-trained citizens, is to import citizens. We are doing that. That's allowed us to grow, but we fundamentally need support from our state at the same time."

Vitter also shared his goals for the university. He said the university is focusing on four areas after conducting a "Flagship Forum" with various Ole Miss groups last year after his hire and a university-wide town hall in the fall.

Those areas, he said, are academic and athletic excellence, building a healthy and vibrant community, and people, places and resources.

He touted the university's status as an R1 research university -- the highest rating in the Carnegie Classification of Institutions of Higher Education.

Vitter's address concluded more than a month of higher education representatives visiting the Columbus Rotary Club, including those from Southern Mississippi, Mississippi State, Mississippi University for Women and the director of the Institutions of Higher Learning -- the governing body for the state's eight public universities.

After the meeting, club president Corky Smith said he hopes to have additional higher education leaders visit the club throughout the year. He said it's important to hear different perspectives on higher learning from across the state.

"The needs of IHL are the same no matter where you are -- the funding, the things that you're able to do for economic development, and actually the way they work as a team," he continued. "All eight presidents work together, and I think it's neat to see how it's not you against me or them against them, it's a real team effort that IHL solves problems together."