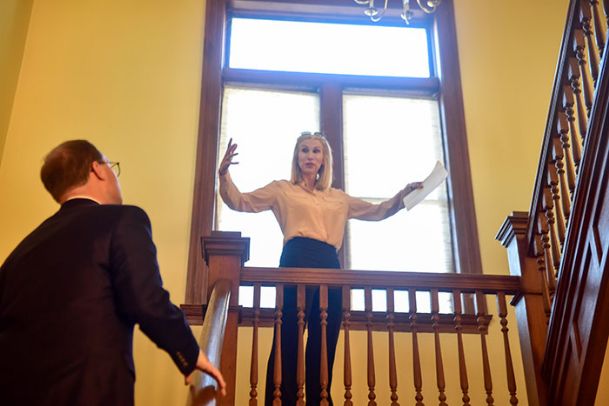 Lisa Castleberry gives a tour of the Elks Lodge Friday to members of the Mississippi Heritage Trust. Plans are the convert the Main Street building into a children's museum. The Heritage Trust celebrated its 25th anniversary last week with events in Columbus. Photo by: Luisa Porter/Dispatch Staff

On February 17, 1992, Kenneth P'Pool met a crowd of fellow history and architecture lovers on Mississippi University for Women's campus for the first membership meeting of the Mississippi Heritage Trust.

Twenty-five years later, he was back in Poindexter Hall reminiscing and celebrating MHT's anniversary, and he even took time to tour a building that could one day house a local children's museum.

"Columbus has always played a key role in the state's history and continues to do that," P'Pool said Friday. "And can you imagine a better place, a more beautiful and historic space ... than Poindexter Hall and this beautiful auditorium?"

The Heritage Trust is a Jackson-based nonprofit that works with lawmakers, educators and property owners throughout the state to promote the preservation of Mississippi's most historic buildings. Funding comes from between 300 and 400 members and goes toward telling the stories of Mississippi's history -- from the successfully preserved buildings memorialized in MHT's Mississippi Heritage Awards to the buildings that have fallen into disrepair, which MHT raises awareness of in its annual 10 Most Endangered Historic Places list.

"We work with our state legislature to say, 'Here are our big success stories. This is why we need to allocate money toward preservation,'" MHT Executive Director Lolly Rash said.

"Peter Brink, who was the vice president of the National Trust for Historic Preservation, had come down," P'Pool said. "And we had gone community to community, starting down on the Gulf Coast and working our way up the state. There were sometimes more than two meetings per day. We tried running from one to another, which is why it got called 'the Mississippi Sprint.'... It all culminated here."

And Columbus, with its collection of private antebellum homes and other historic settings like the Tennessee Williams home and MUW itself, was the perfect place both to start the organization and to celebrate its 25th anniversary, Rash said.

"Columbus has such a wealth of really beautiful private homes that you showcase through your Pilgrimage (held each year in May)," Rash said. "... You've got a big preservation success story in the fact that (Columbus residents Dick and Jo Anne Leike) have taken on Riverview and are restoring it. ... That is a very grand home that could have been lost. It was proposed to be demolished, and yet you had someone step up and say 'We're willing to take that tremendous challenge of restoring this building.'"

Rash and other MHT representatives who came to Columbus for the anniversary toured a handful of the city's historic buildings on Thursday and Friday. Columbus Visitors Bureau even arranged for them to tour the site of the future Columbus Children's Museum, a tour led by Lisa Castleberry, wife of developer Mark Castleberry.

CVB Executive Director Nancy Carpenter took the opportunity to talk up the children's museum at the Poindexter Hall celebration Friday.

"It will be one of the finest projects that we have here in Columbus," she said.

Carpenter hopes the museum, which will be located on Main Street at the site of the old Elks Lodge, will include exhibits for math, science, art and history. She's proposed exhibits in every room and more outside.

The museum, which was initially pitched as having a price tag of about $1 million, may now cost as much as $5 million, Carpenter said. The CVB board has not approved a price.

"I'm excited about your new children's museum," Rash said. "I think that's a really good use of historic space. ... And I think that's one of the battles in historic preservation is really get a building and say, 'We don't want it torn down.' And then you take the next step and say, 'What is the need in this community? What is going to honor that historic fabric and help it become successful in its new use for the building?' And I think that's a great example."

That's what preservation's all about, she said -- protecting memories from the past so they can create memories in the future.

"It's about preserving the places that are going to make memories and create those strong ties to place," Rash said. "... Those are the ties that I bind, I think, for communities. To have historic places you connect to, whether it's on a personal level ... or if it's a public building where a community came together."