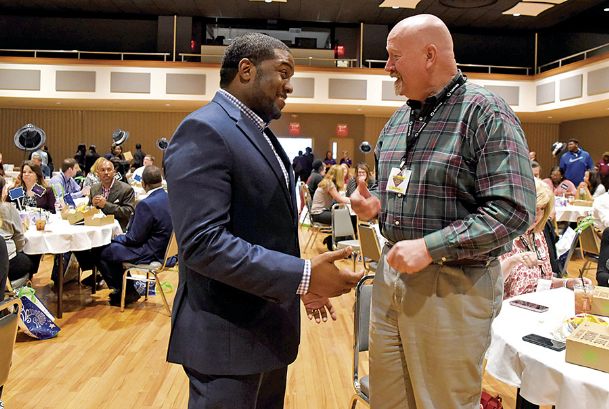 Educators from all over the country came to Columbus Thursday for a technology convention on how they can use and share curricula and other educational resources online -- a movement many of them say is the way of the future.

The GoOpen movement encourages teachers to use free educational resources online that have been vetted and used by other educators throughout the country -- resources that can be tailored to fit the needs of individual districts or even individual students and can be updated to fit the latest information on subjects from current events to science.

"There's a variety of resources that (students) have access to nationwide now as opposed to the static information in a textbook," said Philip Hickman, superintendent of Columbus Municipal School District, which hosted the GoOpen Summit at the Trotter Convention Center.

It's a point keynote speaker Kristina Peters emphasized when speaking to educators at the convention -- with online resources, teachers and students have access to a wider variety that are more accurate and relevant in a society with constantly changing information. Peters is a K-12 open education fellow in the technology division of the U.S. Department of Education, part of a team promoting open educational resources throughout the country.

"Think about how quickly our technology changes as well as the infrastructure to get there," Peters said.

The problem is, she said, the textbooks don't change as quickly.

"How many of you have a textbook right now that has Pluto as a planet?" she asked teachers. "How many of you have textbooks that have George W. Bush as the president? ... We know that materials are not keeping pace with these changes, and we also know that educators already go out and find resources to supplement the content they have in their classroom."

Companies like Amazon, Follett and McGraw Hill -- which has branched from textbooks to online resources -- all have online platforms available where educators can find resources and curricula that are often vetted and recommended by teachers in other parts of the country. That's one of the benefits of OER, Peters said -- teachers can easily share resources.

The Department of Education has labeled CMSD an ambassador district in open educational resources (OER), meaning the district has become a model for how students and teachers can use online resources in the classroom.

Every high school student in CMSD, and every two middle and elementary students in the district, have devices to get online in the classrooms, Hickman said. The district uses online educational platforms from OER company Fishtree. Each student using Fishtree has an online profile that tracks their knowledge and interests and tailors information to the students themselves -- making it easier for students to stay engaged and go at their own paces. It's also saved CMSD about $800,000 in textbooks over seven years, Hickman said.

But cost-saving and textbook replacement shouldn't be the primary benefit of OER, said Fishtree CEO Terry Nealon, who attended the summit.

"Open (educational resources) allow (teachers) to be more creative and more dynamic in their lessons," Nealon said. "It allows you to find different types of resources that are going to help some students versus others. But very importantly, it's not about the content, it's about the variety; it's about the flexibility (of content)."

He used the example of a teacher doing a lesson on tectonic plates -- if a volcano erupts somewhere in the world and makes headlines, online resources allow the teacher to implement that news into the lesson in real time, making it more relevant to the student.

Hope Elliott, instructional technology coach for the Lowndes County School District, attended Thursday's summit on behalf of LCSD. The district isn't part of the GoOpen movement, but Elliott attended specifically to get more information and report back to district administrators.

"I don't think we're ready to take that step and become a GoOpen district, but I think it's something over the next couple of months we'll research," Elliott said.

She said she was particularly impressed at the ability of educators to get involved in the curating and sharing of educational resources online.

"I like the idea of educators contributing and sharing," she said.