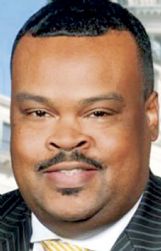 A piece of anti-bullying legislation, co-authored by District 41 Rep. Kabir Karriem (D-Columbus), is heading to the governor's desk.

House Bill 263 requires school districts to establish anti-bullying policies that address how to report and investigate instances of bullying. The bill passed easily through both chambers of the Legislature, and an amended version passed again through the House on a 114-2 vote, with six abstentions. All local representatives voted in favor of the bill.

The bill requires districts' anti-bullying policy to prohibit retaliation against anyone who reports a bullying incident; to establish a method to notify a parents or guardians of bullying victims and of bullies; set out actions a student should take to get help or intervention in response to bullying and to lay out available counseling options for students who are victims of or witnesses to bullying, or students who engage in bullying.

The bill further requires district policy to prohibit discipline of a student who is a victim of bullying and uses "reasonable self-defense" in response to bullying.

Karriem said he believes the bill will make districts investigate instances of bullying, rather than punishing students who may have acted to defend themselves.

"This makes school officials, whether its counselors, teachers, principals or superintendents actually investigate what happened," he said. "They have to get involved and find out what took place.

"If someone comes and hits you, it's human nature for you to hit back and defend yourself," Karriem added. "I thought it was unfair for students to be suspended for situations that are no fault of their own."

Lowndes County School District Superintendent Lynn Wright said he wasn't immediately familiar with HB 263. However, he said LCSD already has a bullying policy in place, and has forms students or parents can use to report bullying instances to its special services department.

Wright said reported instances of anti-bullying in the district are relatively rare.

"I think our administrators, faculty and staff do a pretty good job to curtail it," he said. "We go over the policies the beginning of the school year and each semester."

Still, Wright said it would be helpful for districts that lack anti-bullying policies to adopt one.

"If they do not have a policy, I think it would be great for every district to have one," he said. "Students, as well as parents, need to know they have a mechanism in place and a method to follow up to know they've been addressed."

Columbus Municipal School District Superintendent Philip Hickman could not be reached for contact.

District 17 Sen. Chuck Younger, who voted in favor of the bill, said he thought it was important for the state's schools to strengthen anti-bullying policies. He said that's particularly true with cyber bullying.

"With all the high-tech smart phones and everything we had, that was part of it," Younger said. "You hear about it happening at a lot in schools and we just thought it was the right thing to do."

HB 263 also requires school districts to work with the Mississippi Department of Mental Health to establish suicide prevention policies. The provision was added through an amendment in the Senate.

"Any time you can take a proactive approach in saving lives, I think you should do all you can," Karriem said. "I think that was an excellent provision added to the bill, because at the end of the day, when we send our children to school, we want them to come home."