Asking for a seat at the table 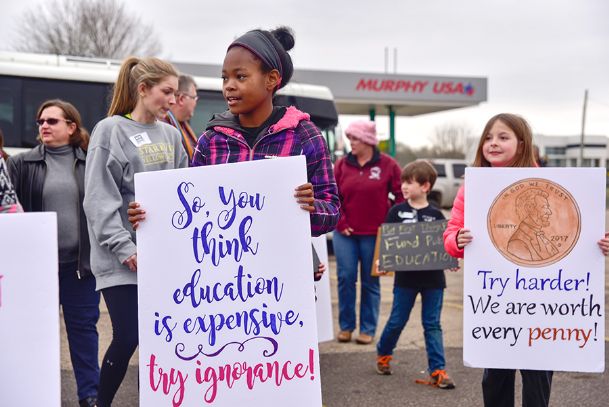 Gabrielle Jeffries, 11, who attends Overstreet Elementary School in Starkville and Noa Baine, 8, right, who attends Ward Stewart Elementary School, both participated in A Seat at the Table rally in Jackson on Thursday to support public education. Gabrielle is the daughter of April Jeffries. Noa is the daughter of Scott and Amanda Baine. Photo by: Luisa Porter/Dispatch Staff

A group of about 24 Golden Triangle residents took a charter bus from Starkville to the state Capitol Thursday for A Seat at the Table, a pro-public education rally.
Photo by: Luisa Porter/Dispatch Staff

Eight-year-old Noa Baine and her 11-year-old sister Phoebe stood crammed into a crowd of hundreds at the Capitol in Jackson. They were there, like their parents and hundreds of others, to show support for public education.

"I believe that all kids should have the ability to learn," said Phoebe. "Some people can't afford private schools because they're too expensive, and all kids should be able to have education."

The two Starkville girls were part of a group of 24 who took a charter bus from the Starkville Walmart parking lot just after 7 a.m. Thursday to Jackson for "A Seat at the Table" -- a rally of Mississippians determined to be let in on the proposed rewrite of the Mississippi Adequate Education Program funding formula, a process they say has not been transparent enough.

The Legislature established MAEP in 1997 and designated it the best way to adequately fund school districts throughout the state. However, it has only fully funded MAEP according to its current formula twice since 1997.

Now lawmakers are pushing through House Bill 1294 to revise the current formula, but critics say the bill's language is not specific enough to clarify the changes made and that the public is being kept in the dark about how the Legislature may fund education in the future.

Other legislators tout school choice as an option, promoting charter schools funded by the state but not subject to oversight by local school districts.

But the crowd at the Capitol Thursday pushed for public money to go to public schools.

"Our legislators, our lawmakers, have pretty much been making this decision behind closed doors," said Starkville resident Leslie Fye, who attended the rally. "While our lawmakers have great information and great knowledge about the state budget, they don't have the expertise to understand what the impact of such a change. All the players that are impacted by this -- our professional educators, our communities and local government and our children and families -- all of those people have an important understanding of how the funding affects us. And the legislators need to hear from us."

The crowd gathered on the second floor rotunda of the Capitol where they chanted, waved signs, shook hands with legislators and listened to speeches from parents, educators, community leaders and even students from around the state.

"I can't even tell you how many people were at the Capitol," Fye said. "It was standing-room only and people were standing in the balconies. It was so exciting to see that many people across our state show up."

Columbus resident Qua Austin took the bus to the rally along with those from Starkville and Aberdeen.

"Education is so important to our state," she said. "It changes lives and Mississippi needs to invest in people. People are our greatest resource."

She's concerned the Legislature will continue to cut funding to public schools in order to fund private schools and demonstration schools -- or corporations.

"Public money for private use is just wrong," she said.

Fye, a founding member of Mississippi Public Education PAC and a mother of two students in the Starkville-Oktibbeha Consolidated School District, spoke at the rally, where she told the crowd the proposed changes to the formula, if passed, would be one of the most important pieces of legislation the state has enacted since it passed MAEP. At that time, it took lawmakers about two years to come up with the formula. This time, she said, they want to get it pushed through in six months.

"That's unacceptable to me," she told The Dispatch after the rally. "It should be just as thorough and just as open of a process and just as well vetted as it was 20 years ago if they truly want a better formula."

If indeed the state even needs a better formula, she added. She's fine with the current one if the state would fully fund it.

Fye was pleased with the turnout but wished there had been more lawmakers there -- particularly lawmakers on both sides of the aisle.

"I shook hands with one Republican lawmaker and, gosh, at least 15 Democrats," she said.

Austin, too, wished she had seen and talked to more legislators who are pro-school choice.

"The ones I talked to are on (my) side of education," she said.

"There's a large group that is not for school choice," she said. "We feel like a state like Mississippi needs to support education, public education. We're too poor and too rural to divvy up our resources. We have to pool our resources and capitalize on economies of scale in order to provide quality education to all our children, from the most gifted to the most vulnerable."