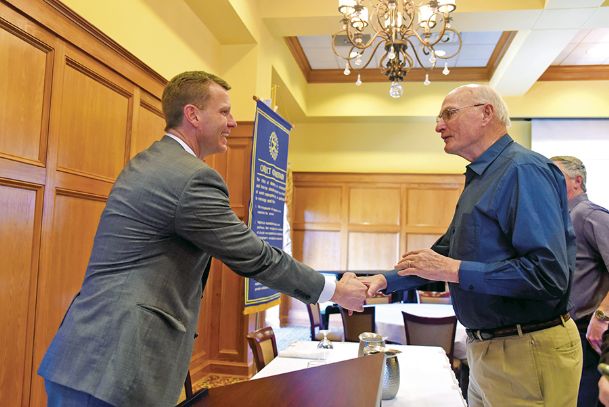 Although it has been operating for just a year, the Mississippi Justice Institute has argued cases from one end of the state to the other and points in between, including Columbus.

Mike Hurst, a former federal prosecutor and MJI's only employee told his audience at the Columbus Rotary Club Tuesday that he has taken up cases over the past year involving government intrusion in the workplace to religious liberty and government transparency.

"We're just getting started, but I feel like we're taking on some important issues," Hurst said.

MJI is an outgrowth of the Mississippi Center for Public Policy, which Hurst identified as a conservative think tank that has operated in the state for 23 years.

"The director, Forest Thigpen, realized that while he had the carrot, through his policy work within the Legislature, what he didn't have was the stick, in other words, a litigation arm," Hurst said. "So, he reached out to me about a year ago and we formed the Mississippi Justice Institute."

Hurst, a Newton County native and a graduate of Millsaps College and George Washington University School of Law, worked in Jackson as an assistant U.S. attorney before leaving that post in an unsuccessful bid for the state attorney general's race last year.

Since taking over his new role, he has argued cases on behalf of clients without charge.

"We are a 501(c)3 charity, and the money we receive goes to helping us provide for litigation for people or groups of people who might not otherwise have legal representation," he said.

Among the cases Hurst has worked on include an incident in Newton County where a football coach was threatened with a lawsuit after he baptized a player off campus.

"He went to his school district to make sure what he was doing was OK," Hurst said. "It was off campus, not done during school hours and no one was required to attend. His wife posted a video of it and it just went wild, with over a quarter-millions views.

"Not long after that, the school district got a letter threatening a lawsuit from a group in Wisconsin called the Freedom From Religion Foundation, saying what the coach had done was against the Constitution," he added.

Hurst said he volunteered to represent the district in the event the group followed through with the threat of the suit.

"A lot of times, these groups win through intimidation and extortion," he said. "When someone threatens you with a lawsuit and says you'll be responsible for hundreds of thousands of dollars in attorney's fees unless you give in, that's a difficult situation. But when someone steps in and says, 'you're not going to extort our people,' they go away. Since we sent (the group) a letter, we haven't heard a peep. I think they knew the law wasn't on their side."

Hurst also represented two Jackson men who wanted start their own taxi companies but were not allowed to obtain a taxi license from the city because of its policies, which Hurst said were unfair. In that case, the judge ruled against Hurst and his plaintiffs because the state statute said appeals over an ordinance must be filed with 10 days of its passage.

"To show you how crazy that is, this ordinance was passed something like 170 years ago," Hurst said. "Obviously these men weren't even alive at the time they would have needed to appeal the ordinance, so we're going to work that on the policy side and try to address that with legislation."

Hurst has also worked on three cases involving government transparency, filing suit to require the Mississippi Department of Revenue to release its agreement with Amazon to collect state sales tax on internet purchases through Amazon.com, as well as challenging city governments in two cities over Open Meeting Act violations.

Hurst is representing The Dispatch in the city of Columbus' appeal to the state supreme court of a Mississippi Ethics Commission ruling that upheld the newspaper's complaint that the mayor and city council violated Open Meeting rules by holding multiple non-quorum meetings with different councilmen on the same issue. Hurst said he is involved in a similar case in Lauderdale County.

"We believe holding government accountable and making sure that government is transparent are very important issues for the people of Mississippi," Hurst said.