Facing a familiar Goliath: Bulldogs still feel sting from last year's loss to UConn as they leave to face Huskies again in Dallas 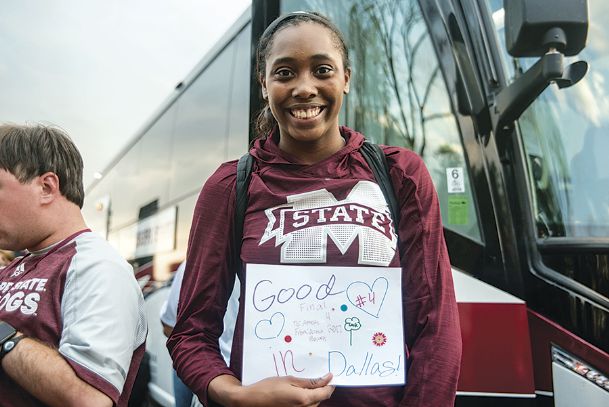 Senior guard Dominique Dillingham stops to take a photo with Olivia Portera, 10, left, daughter of Jennifer and Brian Portera, and Tucker Vollor, 9, daughter of Laura Vollor, before boarding the bus to Dallas on Tuesday.
Photo by: Luisa Porter/Dispatch Staff

Connecticut carries an 111-game winning streak into Friday's NCAA Women's Basketball semifinals against Mississippi State, a streak so long those associated with the UConn program are probably hard-pressed to recall the details of any single win on that list.

Mississippi State remembers one of those wins, in particular -- No. 72.

On March 26 of last year, in a Sweet 16 matchup in Bridgeport, Connecticut, the Huskies sent MSU to a loss it cannot, will not forget -- the basketball version of a date that will live in infamy.

The Huskies led 32-4 at the end of the first quarter, 61-12 at halftime, extended their lead to 68 points and eventually won, 98-38. It remains the single worst loss and most humiliating, embarrassing moment in Bulldog's coach Vic Schaefer's coaching career.

"I felt extremely disappointed walking out of there," Schaefer said Tuesday, a few hours before the team boarded a plane for Dallas and the program's first trip to the Final Four, where it will meet UConn once again -- this time in a national semifinal tipping off at 9 p.m. Friday. "Embarrassing doesn't even cover it. Last year, we played probably the best team in the history of the women's game. We probably couldn't have beat that team if we played them a hundred times, but I just didn't think they were 60 points better than us."

"It was really disappointing and embarrassing," she said. "I don't think anybody wants to go through what we went through last year."

Since then, Mississippi State has acquitted itself quite nicely. The Bulldogs have won 33 of 37 games this season, establishing new records for wins in a season and steamrolling through the first four rounds of the tournament, averaging 92 points per game and winning by an average margin of 20 points.

"We're as hot as anybody in the country," Schaefer said. "We're a different team from last year and even from what we were earlier this season."

Connecticut is a different team, too, although you wouldn't know it by the results.

Last year, the first three players chosen in the WNBA draft were Huskies. All UConn did after losing those players was win all 36 of its games so far this season.

Connecticut has been to 10 straight Final Fours and has won four consecutive national championships, including six of the last eight.

"There's no drop-off," said senior forward Breanna Richardson said. "I think everybody thought they might have a small drop-off because they lost the top three draft picks of last year's team, but UConn's going to be dominant every year."

This time, the Bulldogs at least know what they're getting into, which probably wasn't the case last year.

"Sometimes, the name itself can just scare you, I guess," Dillingham confessed. "If you haven't played them ever, it can have that effect. That's the first thing. Then they play really fast, and that can make you turn the ball over, and their defense is really good."

Psychologically, it's a tricky matter for Schaefer. How much does he talk about last year's game? Is it motivation -- a score to settle, something to prove? Or is it a seed of negativity that grows in the minds of his players as they approach tip-off?

The players aren't sure.

"You can say flush it, just flush it out of your mind," Richardson said. "But it's there. It's on your shoulders. You have to redeem yourself."

"You don't want to dwell on it, but it happened," Dillingham said. "The best you can do is learn from it."

There is no escaping it, and no real point in trying to, Schaefer said.

"To me, it's been something that's always been there in the back of my mind," he said. "I coach out of the fear of failure anyway, so you add that to the equation, it makes you really work hard."

That, he said, is the message he hoped to deliver to his team before boarding the bus to Dallas.

"I'm going to show them parts of last year's game," he said. "They're going to see bits and pieces of that film and we'll use that in a good way. I think."

No matter the outcome this weekend, this Bulldog team has established itself as the most successful in program history, and Bulldog fans have shown their appreciation.

"All the pats on the backs are great. Our team has enjoyed them and rightfully so," Schaefer said. "But at some point, you better get back to reality in a hurry.