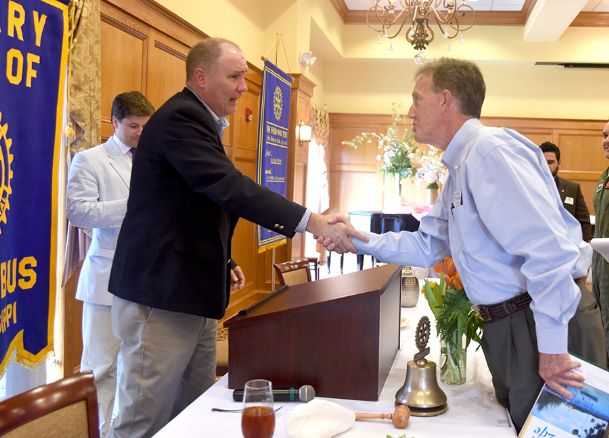 U.S. Rep. Trent Kelly visits with Roger Burlingame after speaking during a meeting of the Columbus Rotary Club at Lion Hills Center on Tuesday. Photo by: Deanna Robinson/Dispatch Staff

For Trent Kelly, the first major piece of legislation taken up by the U.S. House of Representatives may have achieved little, but it revealed much.

Rep. Kelly, who represents north Mississippi, said the health care bill that was debated, but never voted on, is emblematic of a bigger problem.

"I was extremely frustrated with the heath care deal," said Kelly, the guest speaker at Tuesday's Columbus Rotary Club meeting at Lion Hills Center. "What's I know is that we've got to put together a health care system that works for the people because if we allow the current health care system to remain as it is, good people are going to suffer."

Health care was the first big issue addressed by the Republican-led 115th Congress and seen as an effort to make good on a long-standing promise to repeal and replace the Affordable Care Act.

But the Republican replacement plan met stiff resistance from both the left and right. Kelly said, he too, had serious reservations about the plan.

"What we were going to do? I told them on the House floor the night before (the scheduled vote) that I didn't like this bill and hadn't liked it from the start. But we had to put something in place."

The vote was canceled, as the GOP works on another health care bill that will earn enough votes to pass.

"My problem with that bill is that it didn't affect the people on the low end, who have subsidies to buy insurance, or the people on the other end, who could afford health care or whose employers pay for their health insurance. It was the guy in the middle, who is making $30,000 to $50,000 that has to buy his own insurance and can't afford it. The bill did nothing for those people and those are the people I'm worried about."

Kelly said the debate over health care is symbolic of a bigger problem.

"I'm so sick of the partisanship," he said. "There's not a left and a right on so many of these issues: There's what's good to do. You can't tell me that when every issue that comes up and the Republicans vote one way and the Democrats vote another we can possibly be that different."

Some issues, Second Amendment and abortion, aren't negotiable, Kelly said, but there are many topics that should be non-partisan, including health care.

He simply doesn't believe that the two parties should be that divided.

The two men served in Iraq together - Kelly as a colonel in the Army National Guard and Moulton as a Marine captain.

"We got to know each other pretty well when served in Iraq together," Kelly said. "You just can't tell me that we disagree on 80 percent of things because I know that's not true."

Kelly said he's not optimistic that the parties can put aside their political differences to do the work of the people.

"I'm scared right now that there are not enough people up there who will put you before they put themselves. Are you willing to do something for your constituents that might send you home? I don't want to go home, but if it's in the cards, it's in the cards.

"At the end of the day, the Congress and Senate and the President, whether they are Republicans or Democrats, we're all responsible for doing what's best for the people. It's not going to be perfect, but let's get the best we can get for the people."