Childhood home of noted Disney animator, painter Joshua Meador is on the market 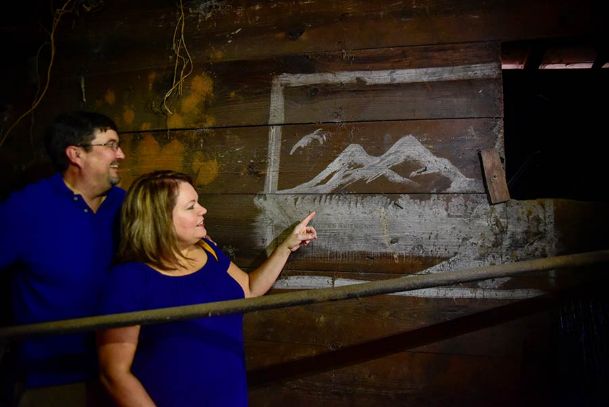 Homeowners Chris and Kim Castleberry show off a painting on the wall of their home's garage that has been attributed to famed Disney animator and painter Joshua Meador, who grew up in the home located on Sixth Avenue North In Columbus. The Castleberrys are selling the home, which was built in 1920. Photo by: Luisa Porter/Dispatch Staff

With the help of Columbus historian Rufus Ward, the childhood home of Disney animator and painter Josh Meador was designated with a historical marker. Although approved in 2010, the marker was not erected until April 1, 2013. As a result of his research into Meador and his childhood home, Ward became an enthusiastic collector of Meador artwork, with 10 original paintings and dozens of sketches he drew in his role at Disney Studios.
Photo by: Luisa Porter/Dispatch Staff

On the wall opposite to the landscape painting in the garage, Josh Meador signed and dated the wall. The homeowners, Chris and Kim Castleberry, were alerted to a rumor that Meador has painted a scene in the barn, which they discovered, along with the signature and date.
Photo by: Luisa Porter/Dispatch Staff

The house on the corner Sixth Avenue North and Ninth Street in Columbus has been for sale for about a month.

It's a charming wood frame home -- about 1,800 square feet, three bedrooms, two baths, a large inviting front porch, unique backyard landscaping and a handsome custom-made privacy fence. It features many of the charms you find with a house built in 1920, but it also has the modern touches home-buyers expect -- an expanded, updated kitchen with new countertops and appliance and modern bathroom amenities.

"It's been on the market for 28 days," said Angela Laster, listing agent for Real Living Hearts and Home Realty as she sat on the front porch of the house waiting to show the home to a potential buyer. "It's had quite a bit of interest."

It is one of dozens of homes on the market in Columbus, but there are two distinguishing features that set it apart -- one out front, in plain view, the other obscured in the original "drive-through" garage at the back corner of the property.

The mailbox identifies the current owners as The Castleberrys, but the home is better known as the Joshua Meador house, as the historical marker out front indicates.

Meador was a pioneering animator, special effects artist and animation director for Walt Disney from 1936 until 1965, when he died from a massive heart attack at age 54.

He worked at a time when technical Oscars went to the studio rather than the person who achieved them, but the special effects Oscar awarded to Disney Studios in 1954 for "20,000 Leagues Under the Sea" is attributed to him.

In addition to playing key roles in such Disney classics as "Snow White," "Pinocchio," "Fantasia," "Dumbo," "Bambi," "Cinderella" and "Sleeping Beauty" -- with credits in more than 75 Disney productions -- Meador also established himself as an innovator in special effects. Some of the techniques he developed still were in use well into the 1980s.

Meador's connection to Columbus was common knowledge among longtime residents, but it's become more commonly known thanks to the efforts of historian Rufus Ward, who in 2010 successfully lobbied with the Mississippi Department of Archives and History to have a historical marker placed at Meador's childhood home. The marker outside the home was erected and dedicated on April 1, 2013, as a part of the Columbus Pilgrimage celebration.

Meador was born in Greenwood in 1911 and moved to Columbus in 1918. The family moved into a new home on Sixth Avenue North when Meador was two, and the house remained in the family until his mother's death in 1970.

"It was in pretty rough shape," Kim said. "It needed a lot of work."

The Castleberrys restored the house, offering it as a rental until 2010, about the time Ward was working to have the house recognized by the MDAH.

"We didn't even know about Meador's connection to the house when we bought it," Kim said.

The Castleberrys learned about that from word-of-mouth, along with another rumor: Meador had painted a landscape on the interior wall of the old wooden garage.

"There was a chef at Harvey's who had been a renter, and he happened to have a conversation with Rufus Ward who was doing research to get the house recognized by the state," Kim said. "The chef told him about the painting, and they called us and asked if they could come over and see it. Sure enough, there it was."

It is a crude rendering of a two mountains, done in what appears to be whitewash. On the opposite wall, Meador signed his name in the same paint and dated it March 12, 1929, when Meador would have been 18, not long before he left for Chicago and, from there, the Walt Disney Studios in California.

"We were told that he later painted the same scene on canvas and the painting was put in Walt Disney's house," Chris said. "So this could be the model for that later painting."

For all his achievements at Disney, Meador considered himself a painter.

Meador painted more than 2,000 canvases and his impressionist renderings -- mostly landscapes and seascapes -- developed a following on the California art scene, often commanding up to $30,000 each. Walt Disney, his boss and close friend, was a particular fan and dozens of his paintings remain in the possession of Disney's heirs.

Ward has become an avid collector of Meador's work, too.

"When I started doing the research for the historical marker, I realized what a great artist he was and began collecting some of his work." Ward said.

Ward has 10 original Meador paintings and dozens of sketches, either hand-drawn by Meador or drawn under his supervision, including some of the earliest sketches of classic Disney characters and scenes.

In July, the Columbus Arts Council will feature an exhibit of Meador's work at the Rosenzweig Arts Center.

"I suspect they'll just about clean me out," Ward said.

The Castleberrys, meanwhile, are moving to a new home off Ridge Road.

"It's a great home for someone," Kim said. "Hopefully, the new owners will appreciate not only the house, but the history of it, too."