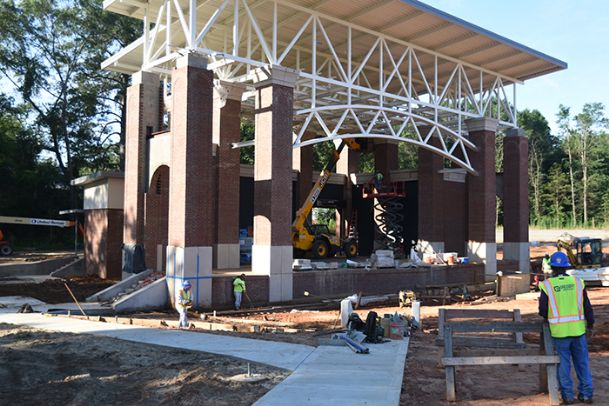 Construction for Phase 1 of the Sen. Terry Brown Memorial Amphitheater on The Island is nearly complete. Official say the $3.2 million project will be finished by the end of July with a ribbon-cutting possible in August. Photo by: Deanna Robinson/Dispatch Staff

J5 Broaddus Senior Project Manager Robyn Eastman said progress at the amphitheater has generally progressed well, even with the heavy rains that have hit the area for the past few weeks.

"The amphitheater will be finished up by the end of July," Eastman said. "We're getting down to the last few items on that."

Eastman estimated the city may consider holding a ribbon cutting sometime in August.

The venue, which is named for the late District 17 state senator, is located on the Island. Construction on the $3.2 million project started last fall.

Gregory Construction and Perma Corporation are located in Columbus. Webster Electric is based in Collinsville.

A drought that lasted in to the fall helped the project get off to a brisk start. That may have helped avoid more serious delays from recent rains.

When both phases are complete, the amphitheater will have an about 3,500-person capacity, with a mixed of fixed and lawn seating. Once finished, the amphitheater could host concerts, church events, graduations and other events.

The Legislature provided the funding for Phase 1. The city is waiting for more legislative funding to start the project's second phase.

Work at the Columbus-Lowndes Public Library on Seventh Street North will also soon begin. The city and county are evenly splitting the cost of replacing all 36 windows at the facility. Eastman said the old windows have started to leak, which has caused some minor water damage.

The project, awarded to Columbus-based Morrow Construction, will cost $49,250. Eastman said the cost includes removing the old windows, installing new energy-efficient windows and retouching the paint around them.

Eastman said J5 has submitted paperwork to the Mississippi Department of Archives and History because the library is in a historic district. He said he expects to get approval in a week or so, and work on the project should begin and finish in July.

The work shouldn't cause any disruptions at the library, he said.

"This should not have any impact on them at all," Eastman said. "We'll coordinate with any events they have and work around them. We anticipate no interruptions to their operations."

Eastman said Falcon Construction will soon begin repaving a stretch of Second Avenue North from the back of the municipal complex to the Trotter Convention Center.

The road has been rough in recent months as crews conduct sewer repairs and install water line upgrades for Columbus Light and Water.

Ward 5 Councilman Stephen Jones said he's aware of the road's poor condition due to the work and asked residents to be patient.

"I definitely can't wait for it to be completed," he said. "Second Avenue has taken so long because we want to make sure it's done completely and we don't want to go back in after they pave it."

Eastman said paving work will also soon begin on North 18th Avenue near Sunflower to close to the Burger King.

Ward 6 Councilman Bill Gavin said the project touches both his and Jones' wards.

"It's a pretty rough," Gavin added. "We've got to get it paved, and that's going to be a big improvement for people."

Eastman said J5 is working with Falcon to minimize traffic issues from the work. According to a Mississippi Department of Transportation of estimate, up to 9,900 vehicles pass along the part of North 18th Avenue set for repaving.

"This is a project that will be very disruptive to traffic," Eastman said. "We're trying to coordinate with the contractor right now to have that work done at night."