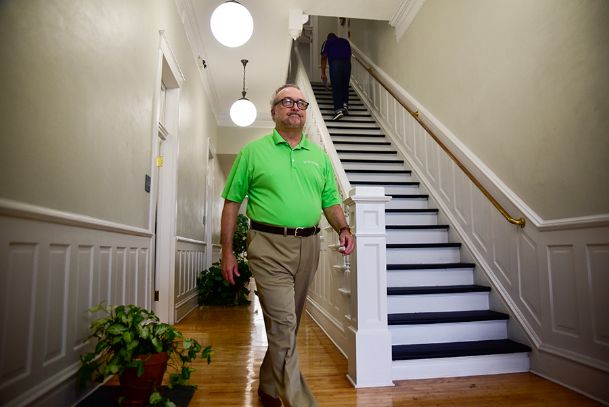 David Armstrong still isn't quite sure what to do with the walls in his office.

For now, Columbus' chief operations officer keeps his pictures and personal effects on shelves or leaning against the wall.

Armstrong is one of several city administrators who have moved back to City Hall downtown in recent weeks. He's back in his old office spot facing the front window of the building's east side, after spending a year in smaller, temporary quarters in the police department during City Hall's renovation.

"I really enjoyed being down there," he said of his time stationed at CPD. "I got to know several of those guys on a personal basis. But it's nice being back."

City administration is continuing a phased return to City Hall, from office spaces it formerly occupied in a small shopping center next to the municipal complex.

Armstrong and Mayor Robert Smith's offices occupy the first floor. Chief Financial Officer Milton Rawle, Human Resources Director Pat Mitchell and their departments are on the second floor. Armstrong said city registrar and city action center head Brenda Williams will also work on the first floor, but she has not yet moved over to City Hall.

Smith, in a statement, said he was proud to see City Hall's renovation finally completed.

"We are happy to be back home in City Hall in downtown Columbus," Smith said. "The renovation of the building was a huge success. We are grateful for the assistance of the Mississippi Department of Archives and History for this funding and for Representative Jeff Smith for his support of the project. This building was constructed in 1903 and this is the first major renovation, and it was much needed."

The city will hold a grand re-opening for the facility but has yet to announce a date.

"Once we finish getting all the boxes unpacked and everything in place, we will have an open house for residents to come and see the work done in the remodeled City Hall," Smith said.

For Armstrong, as with other city officials, City Hall's renovation is a triumph. He said the building has always been beautiful but desperately needed the work.

"It's such a beautiful building," he said. "Historically, it's a significant building. It was just in bad shape. It had somewhat of a renovation back in the '70s, but it really needed to be brought back."