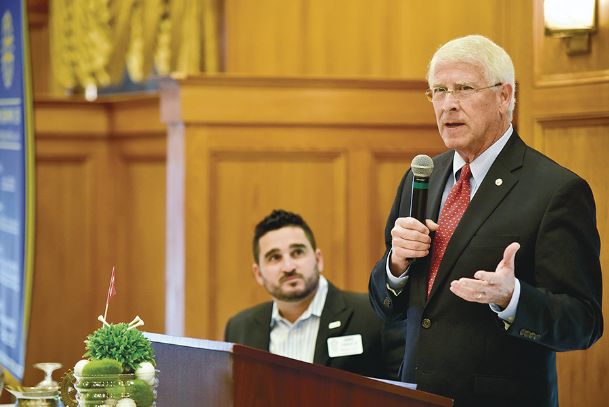 Sen. Roger Wicker speaks to members of the Columbus Rotary Club at Lion Hills Center on Tuesday. He spoke to Rotarians and the Lowndes County Republican Women mainly about Republican efforts in Washington to repeal Obamacare. Photo by: Luisa Porter/Dispatch Staff

U.S. Senator Roger Wicker said Republican efforts to repeal and replace the Patient Protection and Affordable Care Act, known most commonly as Obamacare, will continue despite failed efforts in both the House and Senate.

Wicker, the junior senator from Mississippi, spoke briefly at the Columbus Rotary Club Tuesday about the health care debate and more extensively a few minutes later as he addressed The Lowndes County Republican Women. Both events were held at the Lion Hills Center.

"In the Senate, we came up one vote short of going to conference with the House with a plan," Wicker told Rotary Club members. "My team had a setback a couple of weeks ago, but we're still determined to get the job done."

He compared the Republicans efforts on health care to Dunkirk, the subject of a popular film recently released that dramatizes the evacuation of British forces from a French beach as France fell to the Nazis in 1940.

"The French and British faced a 'setback' in fighting the Germans," he said. "And that is what the Senate has faced with health care."

"I don't believe that is accurate," Wicker said. "It's based on projections and we've seen many cases were the CBO was wrong before. They were wrong about Obamacare, too."

Using another WWII reference Wicker said, like Gen. Douglas MacArthur wading ashore to reclaim the Philippines, the GOP will return to the fight for a new health care plan.

Noting it took a full year for the Democrats to push through the current health care legislation, Wicker said he's confident the GOP will ultimately succeed, and soon.

"Let's be judged on what we do the full year," he said. "I'm confident we can have a plan in place by the end of the year. This isn't over."

Reporters Isabelle Altman and Slim Smith contributed to this article.