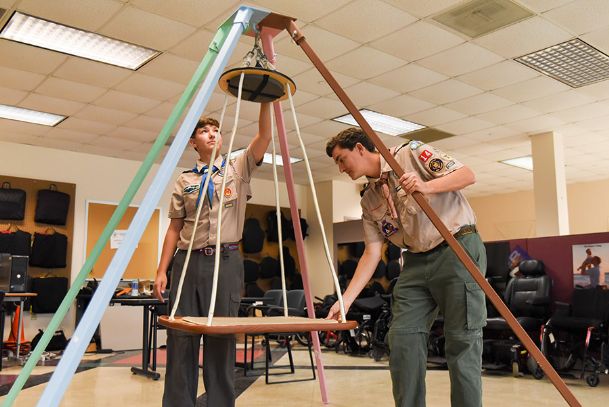 Troop 45 Eagle Scout Simon Banzhaf, 15, of Starkville, and his father, George Banzhaf, assemble a platform swing at the T.K. Martin Center on the Mississippi State University campus Wednesday afternoon. Simon built the stand for the platform swing which can be easily disassembled for storage and relocation. The swing is used for children with sensory overload problems to keep them from being over stimulated or understimulated. Photo by: Deanna Robinson/Dispatch Staff

Dressed in his scouting uniform, 15-year-old Eagle Scout Simon Banzhaf arrived at T.K. Martin Center Wednesday after school to assemble the center's platform swing with its new stand -- a proud moment for him and his father George, as the two of them had made the stand themselves to help out the center.

It was the final step in a long process for the Troop 45 member and sophomore at Starkville Academy, whose first thought when deciding what to do for his Eagle Scout project was to work with T.K. Martin, a Mississippi State University-based center that assists special needs individuals. One of the center's programs is a preschool for children with disabilities -- one of those children being a family friend of the Banzhafs.

It was this little girl who gave Simon the idea to try and work with the center on his project.

"We connected with them and just asked them if there was anything they particularly needed," Simon said. "(We were) just trying to help people that need it."

After some discussion, T.K. Martin staff decided the best way for Simon to help was to get the center a stand for its platform swing -- a flat square swing the staff and teachers use for autistic children who need help developing their sensory skills, center director Janie Cirlot-New said. In other words, the kids can be easily over- or under-stimulated.

"Sometimes that swinging effect helps them regulate their sensory alertness level, which makes them more ready to learn," Cirlot-New said.

The swing is also used as a reward for the kids, she said.

But it had been difficult to use the swing because it simply hung from a chain -- there was no other support structure.

"You couldn't just do it anywhere because you had to have the steel beam to hold it," Cirlot-New said. "... Because when you put a child and an adult on it, it has to be strong."

With renovations recently underway at the center, staff became even more limited in where they could hang the swing. So when the Banzhafs contacted them about a project, that was their request.

It took some back-and-forth to determine the details of the stand, Simon said. Center staff wanted the stand to be mobile while still taking up a minimal amount of space. They eventually settled on a four-legged stand with detachable legs so staff could easily store it or move it from room to room. When set up, the whole thing stands about six or seven feet tall.

Paul Yeatman, the owner of Paul's Welding in Starkville, donated the materials for the project. He even worked with Simon, showing him how to cut the material to the correct length. Another Scout leader, Doug Stone, helped Simon with the actual welding. Simon even welded his initials and the year into the top of the stand.

"His very first welding ever is part of (the project)," George said.

Simon and other Scouts painted the stand after Simon researched good colors to use on equipment for children with special needs -- something no one in the process had thought of except Simon, George said proudly.

"What he found was some calming colors (like brown)," he said. "It's not bright, more of a pastel color."

Throughout the whole process, Simon was not only learning how to weld, but he was honing communication skills -- making sure he was keeping in contact with the center and delivering what the children needed -- and learning how to focus and take initiative.

"Every day (you don't work) is not only a day that you're not getting it done, but a day that everybody else is having to rely on you," he said.

Simon also learned more about the center and what it does -- which is far more than the preschool, said Cirlot-New and case manager Judy Duncan.

The center works with individuals all over the state to help with whatever technology assistance they need, Duncan said. For example, people can come to the center and try out different wheelchairs and see what works best for them so they don't have to guess ordering online from the limited number of places that sell that kind of technology.

"There is not a wheelchair store," Duncan said.

The same goes for other technology that aids those with disabilities. The center also has an assessment team that works with hundreds of children with disabilities a year to help determine what kinds of technological or educational assistance they need before starting school, Cirlot-New said. The center also hosts camps and an art therapy program.

"I think we impact a lot of people over time," Cirlot-New said.

And impacting people is what Scout projects are all about, Simon said.